And, just wait till you see how easy it is for you to win …

When you write down a goal and then declare it publicly … your chances of achieving it skyrocket.

It’s the most important step you can take on your road to success.

That’s why we’re going to help you take that first step today … and we’re going to have some fun while we’re at it with this special “favorite-gift-on-our-wish-list” inspired GIVE-AWAY!

So we decided to give away 10!

Simply write one goal you’d like to achieve in 2012 in the comments here.

You will automatically be entered into our Commit to Achieving Your Goal in 2012 Give-Away, and be eligible for one of the 10 iPads. 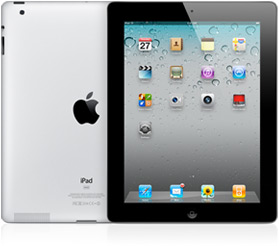 Then make sure you are signed-up for The Writer’s Life – AWAI’s free e-letter that gives you access to the tools, people, and action plans that can help you achieve your goals in 2012. Then tune in each day for two weeks, starting Monday, December 5th, to see if you’re the daily winner of an iPad!

And, since you’re taking that all-important first step towards achieving your goal, we’re going one step further too.

In addition to being entered in the prize give-away, you’ll also receive FREE access to a special teleconference in January with Nick Usborne – a man who credits setting … and then “working” … goals as a major force in his success, and has helped hundreds of freelancers successfully set and achieve goals through his most recent program, Profitable Freelancing. During the call he’ll help you set up with a step-by-step plan for achieving your goal.

Others will have to pay $79 to attend this teleconference – but you’ll get it FREE.

Remember, the first iPad winner will be announced on Monday Dec. 5th in The Writer’s Life And, there will be 9 more in the days that follow. So the sooner you post your goal, the more chances you have to win.