2014 July Kick Your Headlines UP a Notch

Kick Your Headlines UP a Notch
By Clayton Makepeace

When you set out to create a sales message that connects with prospects’ dominant resident emotions, you have no choice but to begin with the prospect.

Specifically, you begin by considering the prospect’s most intense positive and negative feelings about …

… And then, you devise ways to deal with each of these dominant resident emotions in ways that leverage them in your favor: Get them working FOR you; never against you.

When you get it right, the attention-getting power, readership and response of your promotions skyrockets. When you get your prospect’s emotions working for you … 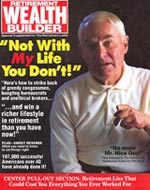 Here’s a promotion for Phillips Publishing’s Retirement Letter – one of their flagship publications in the 1980s and early 1990s, edited at the time by my old friend and fellow (former) Prescott, Arizona resident, Pete Dickinson.

To make this easier for you to follow, just click the photo of the promotion. It’ll open a full-size photo in a separate window that you can save or print for reference.

This promo could have simply led with a headline that said, “Retire RICH!” – a big benefit to be sure. But that kind of lead can lack credibility and worse, it misses the opportunity to fully activate the prospect’s dominant resident emotions about retirement.

Instead, this lead connects with prospects at a deeper, far more emotional level – and in doing so, accomplishes six major objectives …

That’s a LOT to accomplish with just 65 words!

Here are five more headlines and decks – see if you can spot how they use the principles of dominant resident emotion copy to connect with prospects on a visceral level.

Now, you gotta ask yourself: How could employing these principles ramp up the attention-getting power, readership, and response to the ads you’re working on now?

Copywriting legend Clayton Makepeace gives YOU the tools you need to upgrade your copywriting skills. These are the insights he uses to bank royalty checks of six-figures up to $1.4 million per month! Learn More »

1 Response to “Kick Your Headlines UP a Notch”