2014 September How B2B Companies are Winning on Social Media

How B2B Companies are Winning on
Social Media
By Julia Borgini

“For the first time, companies have to compete on the very same turf as our family and friends, using the very same tools, technologies, media, and messaging as consumers. They are invading the space we are using to connect personally.”

You’ll find more and more B2B companies on those same social media platforms now, as they realize they’re talking to people too. Prospects and decision makers are on Facebook, LinkedIn, Pinterest, and Vine alongside your aunts, uncles, and other family members. They’re using the same platforms as your family, however, the way you engage them certainly isn’t the same. As a B2B writer, you already know that you can’t use the same message a B2C company would use, and on social media it’s no different.

Cisco's YouTube channel has over 84,000 subscribers and over 20 different channels, showing almost 3,000 videos. It uploads several videos each day, including Q&As, product demos, and presentations from events. These videos are a useful resource for their customers, as well as being a lead-generation tool for the company as a whole. They attract both viewers and prospects at the same time.

They also use Facebook to promote their thought leadership articles. They’re trying to engage and educate corporate audiences across a range of issues and platforms, creating buzz and generating SEO visibility in the process. 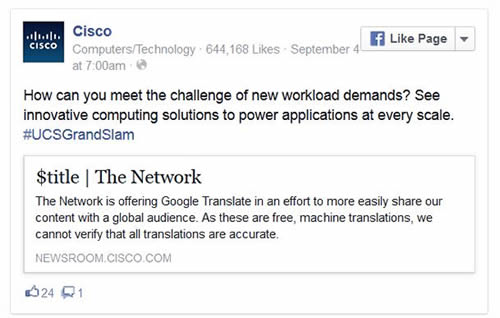 Vine videos are an odd little thing, mainly because they’re, well, little. They’re micro-videos that are only six seconds long, so it’s not an intuitive place for B2B companies to be sharing. But there are ways to use it.

Philips uses their Vine videos to share their office culture with the world. Consumers are more likely to trust brands that show their human side, and likewise, B2B companies want to work with vendors that are engaging and innovative too. Seeing who works there helps as well, as they’re not only seeing the human face of the company, but they’re also gauging the type of employees that work there. Showing happy, satisfied employees working intelligently on projects inspires prospects, especially for companies that might otherwise be too large to relate to.

VMware uses Instagram to do the same thing as Philips, showing what it’s like to work at the software company. They use their dedicated Instagram account, VMwareCareers, to show interesting photos of events and employees. Add in the strategic use of hashtags, and they’re able to engage with prospective employees and customers at the same time, extending their reach into audiences they wouldn’t normally access.

General Electric has a wonderful Instagram account where they show off their production facilities, and rare behind-the-scene pictures that explore all the work GE does. It gives fascinating insight into a technical company that prospects might not be able to relate to from the outside.

GoToMeeting (Citrix) fills their Twitter stream with valuable content for its followers — and not just their own content either. They curate relevant content that their followers will also find useful and engaging. In order to expand beyond the narrow focus of their core business (online meetings), they’ve actually widened their Twitter messages to wider themes. Namely, of “working better.” They send out tips about productivity, working from home, and office humor.

FireRock, a manufacturer of pre-engineered masonry products for contractors and home builders, has been building up a tremendous following on Pinterest. Because they understand their product so well, as well as what their audience is looking for (design ideas for their own projects), they’re able to use Pinterest to its fullest capabilities. It’s a perfect match for them, as they pin pictures of design ideas for different areas of the home, tagging it in categories and with other searchable tags that followers are looking for. They’ve organized their pins and images in such a way that followers can browse through for hours. This is a great way to promote a “boring” B2B product, and make it come alive to prospects and followers. 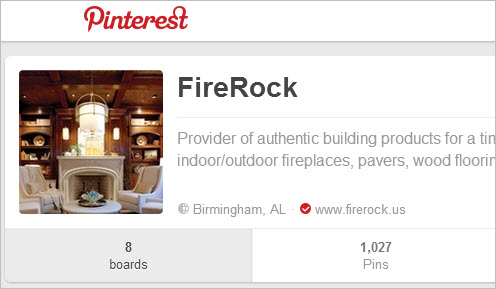 B2B on Blogs & Other Resources — Deloitte

Deloitte takes a different tack when it comes to their “boring” products and services. They’re a large consultancy company that provides a number of different services across a number of industries — audits, risk management, and tax work in a number of industries like government and life sciences. There’s just so much to talk about that it’s hard to focus in on one thing. That’s why they’ve created content hubs for their resources, like the Deloitte University Press, guides, podcasts, newsletters, and more.

Each hub has a variety of information presented in a variety of ways, and is so useful and specific that it’ll satisfy everyone in all the industries they service.

B2B social media can take on a life of its own

That can happen when companies really start taking advantage of the power of social media, and cross-post on several channels — and then take it to the next level. GE Aviation, a division of GE, has taken follower engagement to that new level on Twitter and Facebook. They’ve even given their followers a nickname, “AVgeeks,” which they then use in hashtags everywhere.

Good news! @British_Airways upgrades some of their 747s for their economy and premium economy cabins. http://t.co/q7OZQHnf5R #avgeek

Their followers are so engaged that they’ve taken to using the hashtag on non-GE Aviation-related posts, which makes their social media presence about more than just the company, and helps spread it farther than it might have otherwise. This type of engagement and activity deepens the relationship between the brand and their followers; it might not work at every B2B brand, however GE Aviation’s using it to great success.

Social media is a great tool for B2B

These are only some of the ways B2B companies are using social media to attract more prospects, generate more leads, and show their thought leadership in their industries. They’re creating communities and relationships with their followers in ways they couldn’t before. What do you think — ready to start helping your clients do the same?

This article, How B2B Companies are Winning on Social Media, was originally published by B2B Writing Success.