2016 August The Hidden Truth About Failures

The Hidden Truth About Failures: How They Improve Your Likelihood of Success
By Candice Lazar 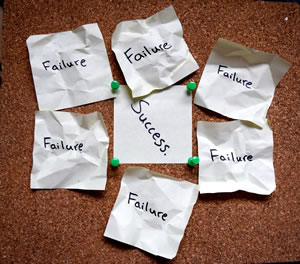 Failure (feyl’-yer). n. A person or thing that proves unsuccessful; an insufficiency; nonperformance of something due, required, or expected.

The definition of “failure” might make you wince a little. It’s a heavy word used to describe some of the worst things that can happen in life. And we’re taught from an early age to do what we can to avoid it at all costs.

Failure is not the monster under the bed. Rather, it’s an opportunity for learning, growth … and ultimately, achievement. Studies have shown that in some situations, failure actually improves your likelihood of success.

As a writer charting your own career path, failure is virtually certain somewhere along the way. By embracing it when it happens, you can learn to not only minimize your negative reactions to it, but also to benefit from it. Read on and I’ll tell you why and how.

Failure Is a Beginning, Not an End

When something “ends in failure,” it’s only that particular course of action for that particular project that is ending. But another way to look at is that you’ve reached the beginning of a new attempt.

And what’s the worst thing that can happen with your next try? You might fail again, sure. But you’ve already been there and done that. And you survived. A second failed attempt isn’t a further setback. At worst, it’s a lateral step.

So don’t overdramatize your failures — or let them stop you from dusting yourself off and getting back out there.

Lessons taught by failure are just as valuable as those taught by success, if not more so. Consider all the things you gain that simply don’t apply when you’re successful right away.

The first time you tried to walk, you fell down. You might’ve cried a little, but you tried again pretty soon afterward, and kept at it until you mastered your new skill.

Failure is inevitable. We have all failed, and we will continue to do so. As writers, it might be by failing to win a project … failing to bring in the sales we’d hoped for … or maybe having a critical typo (such as “can’t” instead of “can”). So don’t panic when you fail at something. Instead, “fail forward” so you learn and benefit from the experience — and set yourself up for success in the future. How to do that? Let me share a few of my own “fail forward” strategies:

Follow these steps and soon enough, your failures will be mere tiny blips on the timeline of your writer’s life. They won’t sting the way they first did, and they’ll make you stronger and wiser. And when you do succeed, the difficulties you’ve encountered will make your victory that much sweeter.

This article, The Hidden Truth About Failures, was originally published by Wealthy Web Writer.

2 Responses to “The Truth About Failures: They Improve Your Likelihood of Success”