2017 March Get Repeat Writing Income by Offering a BIG Idea

The world changes. Industries change. People change. The projects your clients need from you will change. That's why one of the best things you can do to advance your writing career is to keep growing your copywriting knowledge.

But there is one aspect of what you do as a copywriter that never changes. If you master this one thing, your client will give you more projects to do and you’ll enjoy repeat writing income month after month.

This one skill I'm going to tell you about is what separates the “A-listers” from all other levels of copywriters. I'm talking about the Big Idea. In my 30 years of working with copywriters, those who know how to come up with a Big Idea are the ones cherished by clients.

I can also tell you from experience, that the Big Idea is what trips up most aspiring copywriters. Not all ideas are Big Ideas.

Let's say you land a writing assignment with a client. You spend hours, days, and weeks working on the sales copy. You polish off your final draft and send it to the client, eagerly waiting for their response.

When they get back to you with comments, you hear, "It's not quite right. Needs work. It's just not compelling."

When you hear those types of comments, it simply means the Big Idea is missing. It just didn't meet the benchmark of a Big Idea. So let's talk about what makes a Big Idea stand out.

I confess that in the early days of my career, I too struggled with the Big Idea. However, I also consider myself lucky because I was fortunate enough to work with a master of coming up with Big Ideas: Bill Bonner. He's the founder and owner of Agora, Inc., the largest newsletter publishing company in the country. When I started with Agora, it was a small company of just 20 employees working out of a small three-story building. Now it employs close to 2,000 employees worldwide and annual sales are over $500 million.

Bill is the kind of guy who lives and breathes Big Ideas. A copy meeting with him wasn't about the words on the paper but about the Big Idea. You knew instantly that you pitched an idea that wasn't good enough when his response was, "I just don't get it."

So how do you drill down to come up with a Big Idea? Bill had a clever "show and tell" way of explaining where Big Ideas live with his bell curve analogy. If you aren't familiar with a bell curve, it's used in statistics. It's an easy way to show how the distribution of responses fall plotted out on a curve.

Don't worry, Dear Copywriter, this is not a lesson on statistics but it will help you understand the power of a Big Idea. On a white board, Bill would draw a bell curve similar to this: 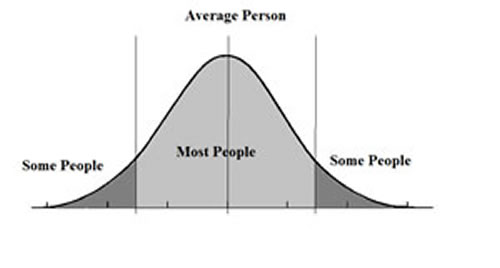 The two areas on the end labeled “Some People” are called outliers. This is where Big Ideas live. Think of them in terms of tipping point ideas. These are ideas that aren't in the mainstream media nor do most people know them. The idea feels new to your prospect … it's something they haven't heard before. Or as AWAI's VP of Marketing and Sales, Helen Buttery explains, "Big Ideas are unique. They are memorable. They make you say WOW."

The neat thing that happens with Big Ideas is that although they start out in the outlier zone, as they catch on with your target audience, they move to the middle of the curve.

When this happens, for you as the copywriter, it means the sales letter you wrote for your client is working really well. Your client is mailing to thousands of prospects with great success. Sales are going through the roof and the royalty check you earned is also going to be Big.

But a word of caution. When the Big Idea moves into the middle of the curve and begins to become more mainstream, then it's no longer something new. You see, as more people know about it and talk about it, the idea becomes ordinary. And then it starts to move toward the other side of the curve. That's the point in time, when your job, Dear Copywriter, is to come up with another new Big Idea for your client.

Each time you do, your client will be more than happy to pay you big fees, and you’ll enjoy repeat writing income month after month.