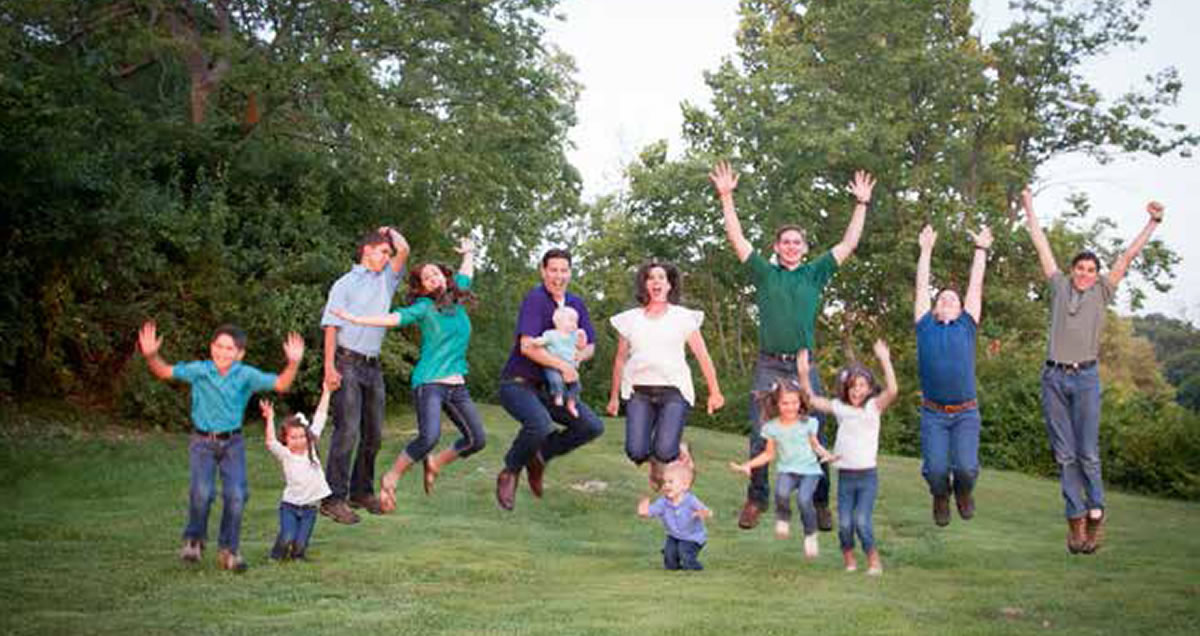 When Joshua Boswell was 20 years old, he wrestled with that bear of a question, “What do I want to be when I grow up?”

Doctor, lawyer, businessman — No career he considered felt fulfilling. Then one day it hit him as he walked down the street.

“I wanted to be a daddy,” he said. “I wanted that to be my primary objective and purpose in life.”

Joshua’s dream wasn’t just one or two children. He wanted a very large family — and that dream isn’t cheap to house, feed, clothe, and transport.

He’d discovered his purpose, but not yet the profession to support it. It would take more than a decade to arrive at a career that provided both enough money to support a family that ultimately grew to 11 children, and more importantly, enough time to spend with them.

Not long after Joshua found his purpose, he married his “dream girl,” Margie, and they soon started expanding their family. He initially worked in fundraising for nonprofits and political campaigns before venturing out to start his own business helping nonprofits raise money.

In 2004, he was owner of a 35-person, growing call center in Kansas City, Missouri. But that changed overnight. The high-tech software the company relied on for all its calling went out of business, and there was no replacement to be found.

“I dialed the number for our software vendor and it was disconnected. They literally had just unplugged everything the night before, walked away, and didn't tell anybody,” Joshua said. “I would have needed about $120,000 dollars to replicate that technology, and we didn't have the cash. So we folded.”

Joshua was left with $200,000 in debt and serious concerns about how he would take care of his family. Margie was focused on taking care of and home-schooling the kids.

The Answer: In His Mailbox

Following the close of the business, Joshua did a few odd jobs, but the income was no match for the Boswells’ bills. Calls from “friendly” collection agencies were relentless.

Then one day, he received a letter in the mail from American Writers & Artists Institute (AWAI) with a headline he couldn’t ignore: “Retire This Year! … and Still Make More Money than Most Doctors.” Joshua and Margie thought, talked, and prayed about the opportunity.

“When the letter showed up from AWAI, it was like handling a box full of magic powder,” he said. “I read through it again and again and that still, small voice in the back of my head and in my heart was saying, ‘Hey, this is something you can do.’”

Joshua had written a few fundraising appeals for political campaigns and nonprofits, but didn’t realize it was called copywriting — or that it was such an in-demand skill.

“When I found copywriting, it really clicked for me,” he said. “I thought that I could build any kind of lifestyle I wanted. I could really do this without working full time and I could spend the rest of my time with my family.”

Moving forward wasn’t simple. With an empty bank account, he reluctantly borrowed money from his brother to begin The Accelerated Program for Six-Figure Copywriting.

Joshua diligently completed every assignment and studied every sales letter in his mailbox for winning tactics. When he heard about an event focused on finding clients, put on by legendary copywriter Bob Bly, he knew he had to be there. The problem: coming up with $5,000 for the event when the rent was nearly two months past due and the utility company was threatening to turn off the power.

“You might as well have asked me to buy the Taj Mahal,” he said. “But fortunately, my in-laws agreed to loan us the money. Convincing my in-laws to lend us the money was possibly one of the greatest sales jobs I’d done in my life — but we eventually paid them back many times over.”

Writing for Dozens of Fortune 500 Names

When he returned from the Bob Bly event, Joshua started sending out prospecting letters, but soon ran out of money for stamps. He turned to cold calling on the phone and quickly landed a few projects with a Washington, D.C. PR firm, which turned into a monthly retainer. There, Joshua gradually built his portfolio of samples with work for dozens of Fortune 500 companies.

His bottom-line impact for clients keeps them coming back. A project for Adobe captured 15 percent of the market for a product, amounting to hundreds of millions of dollars. For St. Jude’s Children’s Research Hospital, he helped raise donations by more than half a million dollars over previous efforts.

Joshua now supports his family very comfortably — making well into the six-figures. He has set the brass ring even higher: $1 million a year.

Even more impressively, he does it all from his home in Kansas City working less than full time. His wife and kids are just down the hall, home-schooling.

Most important, Joshua spends much of his day doing what he’s always wanted to do most of all: being a dad. He writes every morning from about 5 a.m. to 8 a.m. Then he joins his family for breakfast, prayer, and scripture. He works again until noon when the whole family takes a break for lunch and a trip to the gym. In the afternoon, he fields a few calls and emails, or plays or goes for walks with the family. In the evening, he’s free for more family time and church responsibilities.

The Boswells also take to the road as often as they can. Last year, they took six trips of one to four weeks each, including a visit to the U.S. Space & Rocket Center in Huntsville, Alabama, and a cruise around the Bahamas and Mexico. And their vacations are truly vacations: Joshua leaves work completely at home.

“My family and I have total flexibility of time. We don't have to be anywhere,” he said. “We can spend the time together. It's important to us.”

Do you have any questions about how you can get started? Please share with us in the comments below so we can point you in the right direction.