2020 June Earning Six-Figures … from a Sailboat in Mexico

Earning Six-Figures … from a Sailboat in Mexico: How One AWAI Copywriter Made It Happen 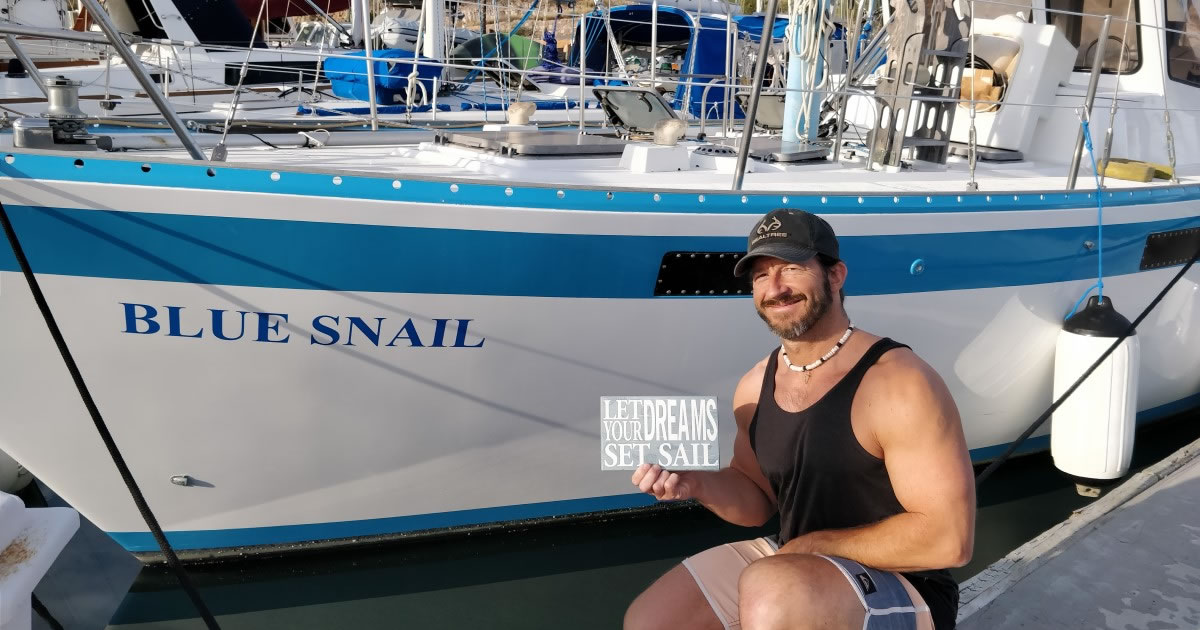 Keith Trimels had always dreamed of living and working on a sailboat. But two obstacles stood in the way.

For one, owning a training and consulting business required too many nights in hotels. And second, he could never find just the right sailboat.

But by following a hunch and continuing to walk through doors, he has found himself a sought-after writer sharing drinks with some of the top names in copywriting — and earning six-figures annually.

All while living on a boat in the Sea of Cortez, Mexico.

How did this engineer spin his writing talent into his dream life? Through a series of bold moves and by answering when opportunity knocked.

Following the Signs — and Arriving at a New Life

Looking back, the signs were there all along …

In college, Keith won an award for a technical report he’d written.

Later, when seeking a transportation engineering job, his ability to express clear ideas in writing was ‘light years ahead’ of most engineers — earning him the position.

Then came the repeated requests to write proposals for clients in his technical training and consulting business — so much so that proposal writing went from an afterthought to a business driver.

“Almost every proposal I wrote, won!” he says. “We were helping our clients win seven-figure contracts, so I knew I had something.”

That was Keith’s first clue that his writing talent could actually generate an income. And as he grew weary of traveling for work, a career where he could work from anywhere looked increasingly attractive.

Thus when he heard about AWAI’s Accelerated Program for Six-Figure Copywriting, he jumped. At a minimum, building his skills would elevate his training company’s proposals. But it could also pave the path to his dream.

“I started going through the program immediately,” he says. “I may have been following some of the fundamentals already, but now I understood why they worked. It all made sense.”

Keith could have stopped there, just using his newly sharpened skills to grow his existing business. But what he did next ultimately led him right to that sunny spot on the Sea of Cortez.

After pouring over The Accelerated Program, Keith wanted to step up his game. He decided to reach out to AWAI copywriter Paul Lawrence after following him via his mailing list. He mentioned he’d be in his area, and invited him for coffee.

“I hustled him,” Keith says. “I told him, ‘I’ll write for you for free if you give me feedback. You have nothing to lose.’”

The move proved both beneficial and butt-busting. “It was excruciating,” he says. “He and his mentor, [AWAI’s] Mark Ford, were beating the hell out of my headlines and leads. It was ‘get blasted and then rework, get blasted and rework.’ I was in way over my head!”

But in the end, the promo he wrote performed … leading to another project with Paul.

Ready to try his skills with real clients, Keith sent his resume to a contracting outfit that matches writers with companies. In the first interview, the account manager for the contract company called out his lack of experience.

“He said, ‘I’m looking at your resume — and it sucks,’” Keith laughs. “’But I saw your website and it’s freaking incredible. What you wrote is basically the manifesto for a technology client we work with.’”

The manager and senior copywriter of that client’s internal copywriting team checked out Keith’s website, and the deal was done. And that’s how Keith came to write for one of the largest, best-known technology companies in the world.

While the gig did build his skills, it barely paid the bills. When he informed the tech company client that he would be moving on, they couldn’t let him go. Instead, the company reached out to him directly — awarding him an attractive, three-year contract.

While there, he wrote the proposal copy for billion-dollar launches, plus a 20-page dossier explaining the tech company’s relationship to the newly arrived CIO of a global bank — with which the company had over $300 million in annual sales.

Keith, who lives in Cheyenne, Wyoming part of the year, chose to drive down to Denver for an AWAI sales letter workshop from one of the masters, Clayton Makepeace.

By day, he learned from Makepeace and other masters such as Parris Lampropoulos. By night, he joined them at the bar to talk about copywriting — and life.

“When you have a conversation and you’re sharing knowledge, it’s mentoring for free. It’s insane,” Keith says. “At the end of the day, they’re people like us with kids and family too. When you talk about all that, they see you as real. It doesn’t mean they’ll throw work at you, but that good energy can lead to good opportunities.”

And indeed, those conversations did lead to copywriting gigs with top financial publishers, including Clayton’s final promo with Weiss Research before he joined Money Map.

That live-event energy has continued each year at AWAI’s FastTrack to Copywriting Success Bootcamp and Job Fair, where Keith forged relationships over drinks with fellow copywriters and instructors like Bob Bly.

“There’s no substitute for face-to-face conversations. You get to see the other 85% of communication that occurs beyond words and tone,” Keith says.

Ready for Any Kind of Project

Back home, Keith continued growing the writing part of his work, whether in his training company or with independent copywriting projects.

He wanted to be ready for any type of project that came his way. So when AWAI’s Circle of Success opened up, he didn’t hesitate to join.

“To get access to all the training I would need for a new career — for less than the cost of starting just about any other type of business — Circle of Success was an easy decision,” Keith says. “Now, I have my library with anything I need to be confident in selling myself and not have to worry about what I’ll do if the prospect says yes.”

Fulfilling the Rest of His Dream

These days, Keith is a B2B copywriter specializing in lead generation, sales proposals, and edu-marketing content for technology companies, which taps into his engineering background. Somewhere along the way, Keith found his writing superpower: breaking complex concepts into something people can understand.

Keith now brings in six-figures annually from copywriting alone. And he still has the flexibility to run his training and investment companies.

As for the second part of his dream, the boat, well that seemed to fall in his lap. Years earlier, a friend of a friend had showed him the sailboat of his dreams, a custom model with distinct spaces for work and sleep — that wasn’t for sale at the time.

Years later, he happened to see that exact boat for sale online, docked in Mexico, and he knew it was meant to be.

Keith’s grateful for the chance to work where he wants, doing something he loves.

“The flexibility that copywriting offers is truly priceless,” he says. “I have clients from Australia to Germany to India … and they don’t even know I’m sitting on a sailboat. If someone would have told me a few years ago that I’d be writing for big-name companies with legendary copywriters in my Rolodex, I would have said, ‘You’re out of your mind.’ But here I am.”

Do you have any questions about getting started as a copywriter? Share with us in the comments below.

1 Response to “Earning Six-Figures … from a Sailboat in Mexico: How One AWAI Copywriter Made It Happen”