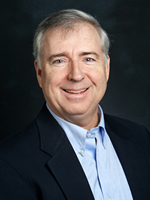 MARK EVERETT JOHNSON began his writing career in political communication. His initial exposure to direct mail came in 1977 as an intern at the American Conservative Union, where his first responsibility in direct mail advertising was walking the daily deposit to the Capitol Hill branch of First American Bank (and safely returning). He also contributed to ACU’s magazine, Battleline, and contributed to press releases and research reports.

After ACU, Mark worked with brilliantly successful direct marketers Huck Walther and John ‘Terry’ Dolan, each of whom built large and politically influential organizations based on the use of highly effective direct mail copy.

Mark’s first job devoted exclusively to direct marketing came at The Viguerie Company in 1981. Richard Viguerie is considered the pioneer of political direct response advertising, having launched his business in 1965 on the strength of the Barry Goldwater presidential campaign donor list.

In 1985, Mark transitioned from fundraising mail to commercial direct marketing, joining the creative department of publisher Rodale Press (now Rodale, Inc.). At Rodale, he managed an in-house staff of copywriters and editors, and worked closely with ‘A-list’ freelancers. He wrote numerous direct mail packages including controls for Rodale magazines and newsletters such as Prevention, American Woodworker, Scuba Diving, Practical Homeowner, Bicycling, and The New Farm. His campaign for Prevention sold approximately one million subscriptions in the mail and through direct response television.

Mark was appointed creative director at Rodale in 1989, leading an in-house agency of forty direct response copywriters and designers. In 1992, he left the company to begin his freelance career, writing controls for Agora, Audubon, Boardroom, Condé Nast, Scholastic, Time-Life Books, Vita-Mix, and other leading direct marketers.

In 1995, Mark wrote a subscriber acquisition package for Mayo Clinic Health Letter which, as of this writing, has mailed quarterly (with ongoing updates and enhancements) for sixteen consecutive years. The campaign has mailed over 200 million pieces, generating over four million paid orders and $100 million in gross revenue. Inside Direct Mail newsletter called this letter ‘the most successful promotion ever created for a monthly periodical.’

In addition to Mayo, Mark serves a limited number of clients in the fields of publishing and precious metals. He is a frequent speaker at industry events, and presents in-house seminars on copywriting for publishers and other direct marketers.