From Surfing to Parenting, Engineer Builds Life of Freedom – and Wealth – with Copywriting

Engineer, surfer, Jiu-Jitsu black belt, neighbor to sports legends, husband and dad – these are some highlights of Rob Gramer’s path to the writer’s life.

As a young engineer, Rob thought he landed his dream job right out of college. Working at a big-name firm, he built jet engines for Boeing and Lockheed Martin.

But being an engineer wasn’t what Rob imagined. The environment was toxic, bureaucratic, and frankly, not stimulating.

One day, as he sat in a conference room full of engineers to review a project, the meeting began with a 20-minute, feature-by-feature discussion about a colleague’s new calculator watch.

“I can't spend the rest of my life in meetings like this,” Rob thought. “I love building things – but I can’t stand being bored.”

Rob soon ditched his engineering job to pursue an idea that had been playing in the back of his mind for a few years.

As a prank, a college friend had signed Rob up to receive emails from a slew of random websites. Lucky for Rob, one of them was Early to Rise by Mark Ford.

The site featured Ford’s essays on copywriting and entrepreneurship, and encouraged readers to shed their day jobs and create six- and seven-figure businesses that drew from their passions and expertise.

“As a freelance copywriter, I could make enough money to pay my bills and then go surfing,” he explains. “I could work when I want, how I want… I could have total freedom.”

Rob soon learned about The Accelerated Program for Six-Figure Copywriting from American Writers & Artists Institute (AWAI), which Ford had co-founded. The program is the industry standard for learning persuasion and the art of direct response.

While still working as an engineer, Rob dove into the Accelerated Program and started acquiring the skills he needed to launch his next career.

Rob dabbled in copywriting at first, snagging small projects from job boards. Then he decided to go full bore. He applied for staff positions at direct response companies in hopes of learning side-by-side with some of the best.

Rob aimed high – even though he had little copywriting experience. His big break came when he interviewed at The Agora Companies and actually met Mark Ford.

Like Rob, Ford was a black belt in Brazilian Jiu-Jitsu. That common bond – and Rob’s enthusiasm for copywriting – led to a mentorship with Ford at Agora’s Sovereign Society.

Rob was on his way. He had a job in financial publishing, learning the art of direct response from one of the world’s most successful copywriters.

Still, there were challenges…

“My writing skills weren’t that strong yet,” Rob admits. “But nothing teaches you faster than having someone look at your work and say, ‘Man, this is terrible. Here’s how to fix it.’”

Then came the global financial crises of 2008. Subscriptions plunged – and Rob lost his job.

But his year at Agora got him over the hump. Now, Rob had the skills to go out on his own as a freelance copywriter.

Rob launched his copywriting business at the height of the Great Recession. In the beginning, he felt like he was grinding away, making $1,000 here and $500 there.

He looked for writing projects on craigslist and automated his responses to answer more ads faster. He took small, low-paying assignments and upsold his clients to bigger projects. Then he created information products teaching other copywriters how to grow their businesses.

It was an enterprising start, but Rob wanted more. He realized that to make it big in direct response copywriting, he needed to shift his mindset about writing sales letters.

“I was never one of those people who always dreamed of becoming a writer,” Rob explains. “Growing up, I liked to build things. Then I figured out you don’t write sales letters, you build them. That was a game changer for me.”

Rob likens copywriting to building a car. In sales letters, the headline, lead, proof, guarantee, close and P.S. are the “must-haves,” like tires.

“AWAI’s Accelerated Program does a great job of giving you the nuts and bolts and making them easy,” Rob points out. “Mastering the fundamentals takes commitment. But once you get them all down, you’re golden.”

But strong writing skills are only part of the equation. To succeed as a freelance copywriter, Rob also had to know how to sell himself.

Events like AWAI’s FastTrack to Copywriting Success Bootcamp and Job Fair moved his career forward. There, Rob landed many of his highest-paying, repeat clients and forged relationships with fellow writers, and AWAI’s speakers and faculty of A-list copywriters.

At the start, freelance copywriting gave Rob the chance to travel the world, pursuing his interests. He’d get his bank account up and then take off to surf in Costa Rica or Nicaragua.

As Rob honed his skills, he started landing bigger clients. One of his favorites was Lloyd Irvin, a Jiu-Jitsu champion well-known for his instructional DVDs. Rob even lived at Irvin’s academy for two months and trained with his fighters.

“I thought, ‘This is the dream,’” Rob recalls. “I was writing copy to sell Jiu-Jitsu DVDs and training all day. It was perfect.”

Rob knew he had made it as a copywriter the day he received his first check for more than $100,000. When a business launch went big, he earned a sizable cut for crafting the copy.

His confidence grew when he started turning down $20,000 projects because his schedule was full, and he didn’t need the money.

Positive word of mouth landed Rob an offer for a staff copywriting position with Dr. Al Sears, a well-regarded direct response company in the health and wellness niche.

The timing was right. Rob and his wife just had their first child, and the stability of a solid income sounded appealing.

So after nine years of freelancing, Rob accepted the job. Within a couple years, he rose up the ranks from copywriter to copy chief.

Rob views his fascination with science as his writing superpower. He loves diving into studies and finding that interesting nugget nobody else is talking about.

But it’s the flexibility of copywriting that’s perhaps the biggest perk.

Today, Rob and his family live in the seaside community of Jupiter, Florida, one of the ritziest zip codes in the United States, where celebrities like Michael Jordan and Tiger Woods call home.

Rob has plenty of time to spend with family and the financial freedom to do what he wants.

On a recent trip to Costa Rica, he surfed with his buddies. Between sessions, he laid on the beach, while on his phone, deep into research on cutting-edge diets.

For inquisitive people, Rob thinks there's no better career than being a writer. And copywriting is one of the most lucrative jobs a writer can have.

“I get to satisfy my interests and intellectual curiosity – and make a bunch of money,” he says. “Put these altogether, and it’s the ideal career for me.”

Learn more about the program that kicked off Colette’s career,
The FastTrack to Copywriting Success Bootcamp and Job Fair.. 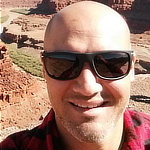 “I get to satisfy my interests and intellectual curiosity – and make a bunch of money. Put these altogether, and it’s the ideal career for me.”

Member:
Rob Gramer
Location:
Jupiter, FL
Former Career:
Engineer
How They Got Her First Client:
He landed his first freelance client from a job board.
Top AWAI Programs: