Robert Rice has juggled his share of odd jobs – sometimes all at once. Server, caterer and instructor for baby music classes… all so he could keep paying the bills while pursuing his real passion: acting.

He boldly decided to follow his dream. But doing so meant finding ways to bridge the gaps in his income between and alongside parts in musical theater shows.

Yet his jobs often conflicted with acting.

“Even though all those odd jobs were technically flexible, there were still a lot of situations where I'd have an audition and I was supposed to teach a class or work a catering shift, and I couldn’t get it off,” he says.

On New Year’s Day, 2013, Robert resolved to end the cycle of odd jobs. The night before, a friend had mentioned copywriting as an option.

So as the year began, he found himself reading books written by some of the industry’s top copywriters. But he knew he needed a more structured approach, which he discovered in The Accelerated Program for Six-Figure Copywriting from American Writers & Artists Institute (AWAI).

“The Accelerated Program provided the structure and step by step-by-step skills-building that I was looking for to get me where I needed to go,” he says. “When I finished, I felt accomplished and ready to take the next step.”

For years, Robert had shown up at countless auditions, often to hear he wasn’t what they were looking for. As he embarked on a copywriting career, he summoned that very same courage and thick skin as he reached out to prospective clients.

Sure, he received his fair share of “no’s,” but as always, he simply moved on to the next potential opportunity.

With persistence, he landed his first paying client through Elance, an online site for freelance jobs. A third-party Amazon seller hired him to write product descriptions.

But real on-the-job experience – and income – came when he secured a remote apprenticeship with a direct response agency. He would effectively serve as the owner’s “copy cub,” learning directly from him how to write online content and emails.

Over two years, Robert became proficient in all manner of direct response writing, along with strategy – attractive skills that snowballed his workload.

Writing by Day, Performing by Night

As his copywriting business grew, Robert dropped all the odd jobs. When he landed a part in a musical production, he spent the summer in Maine. By day, he wrote, and by night, he performed. No need to quit a job to take on a traveling show, as he once did.

The same went for a show in Florida, where he spent four months.

“I would write in the morning, then hang out by the pool and then do a show at night. I'm like, ‘This is the life! This is what I signed up for,” he says.

And as Robert and his husband planned a move to Los Angeles, he was relieved that he wouldn’t need to line up odd jobs immediately or sweat through a break in his income.

“Regardless of where I go, my writing goes with me. It’s so flexible,” he says.

Inspiration and Confirmation – at Bootcamp

Along with the Accelerated Program, Robert attended AWAI’s FastTrack to Copywriting Success Bootcamp and Job Fair in Delray Beach, Florida. Early on, the event gave him inspiration and confirmation that he could make a living with copywriting. Later on, Bootcamp provided rich networking opportunities, including the chance to write for AWAI.

“Everyone at Bootcamp is kind, friendly and willing to talk to you,” he says. “They're all real people making money with copywriting and having a nice life. It’s like, ‘OK, I can do this too.’”

Prioritizing Acting… Because of Copywriting

Now in LA, Robert’s acting career has shifted from the stage to the screen. He’s held parts in movies, TV series and commercials.

No two days the same, his schedule is peppered with acting jobs and classes, auditions, and meetings for personal film and business projects. He and his husband recently raised funding for their own film project. And Robert is a partner in starting a new mobile app.

Copywriting easily slots in anywhere among all that. He spends about three to four hours a day writing for various clients, including AWAI.

That flexibility also comes as a relief to agents and casting directors.

“I’ll say, ‘I work for myself. I'm a copywriter. Whenever you need me to be at something, I can be there because I have flexibility,’” he says. “And immediately, they're so happy because they don't have to fight with me having a job and conflicts. It can be an advantage.”

“I got into copywriting because I wanted nothing to get in the way of my acting career, but to still be able to pay for my life,” he adds. “I always stuck to my guns about prioritizing acting and copywriting has allowed me to do that.”

Learn more about the programs that helped open doors for Robert, including the The Accelerated Program for Six-Figure Copywriting. 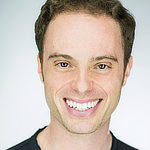 “My AWAI training and career have been such lifesavers because I haven't had to find a new job every single time we've moved. I can just pick up right where I left off in the last state – with no gaps in my income.”