From Housekeeper to Well-Paid Copywriter – at 23

When Catherine Cairns-O’Keefe was 19 and out of high school, she tried a number of jobs – housekeeping, night cleaning and waiting tables ­– but her heart wasn’t in any of them.

When her father showed her a freelance writing program he had recently discovered, it sparked something in Catherine. Freelance writing offered what she’d been looking for: the chance to work on her own terms.

“I was really, really intrigued by the fact that I could write and work from home,” she said. “I always liked English and writing, and I have a strong freelance spirit.”

But Catherine was starting from zero. She knew little about copywriting, and even less about running her own business.

Making the Leap, and Landing a Client

Catherine joined her father in signing up for The Accelerated Program for Six-Figure Copywriting from American Writers and Artists, Inc. (AWAI), a self-paced program to learn how to build a career – and attractive income – writing promotional copy for companies.

Catherine diligently and faithfully did all the assignments and absorbed all she could on how to get clients. She also took a business course in her community to learn how to start and run a business.

“To pursue a new career, I knew I had to be a diligent student,” she said. “This idea of selling with words was new to me so I really spent time studying and embracing these concepts.”

Then, she took a big leap of faith. Before even landing a client, she quit her job as a housekeeping supervisor in order to focus on copywriting. “I decided I had to leave the safety net of a job and make copywriting happen fully,” she said.

Now, the pressure was on to find clients – fast. Catherine had prepared though. She drew on what she’d learned in the Accelerated Program, not just on how to write persuasive copy, but how to promote herself as a copywriter.

She identified self-help publisher Nightingale-Conant as a dream client because she’d personally enjoyed self-help programs and publications from the company. But rather than sending a resume describing her capabilities, she had carefully crafted a sales package showing her skills and mailed it.

“I sent Nightingale-Conant a self-promotional package and followed up,” she said. “Within six weeks, I had my first paying project. It was a very life-changing call to hear they wanted to work with me for amazing pay. I thought, ‘I don’t have to go back to a job.’”

The Nightingale-Conant project was the beginning of years of continuous work as an in-demand copywriter as Catherine proved – again and again – that she could deliver results for clients.

Soon after landing work with Nightingale-Conant, she attended her first AWAI FastTrack to Copywriting Success Bootcamp & Job Fair, where she met Agora Publishing and Lori Allen, Executive Director of Great Escape Publishing – both of which hired her later.

Great Escape hired her frequently for copywriting, research, editorial, and more throughout the years. In writing for Great Escape, Catherine found new creative outlets – and sources of income. When Great Escape engaged her to write the promotion for a program called Turn Your Pictures into Cash, Catherine was inspired. She later took the opportunity to go through the program with the eyes of a student again. She pocketed a wealth of information about making money from photography, an interest that, until that time, had just been a hobby.

From there, she built her skills by assisting her brother, a professional photographer, at weddings. She also started setting up her own stock photo shoots. Now, she adds to her monthly income by selling her stock photos on sites such as Dreamstime and Can Stock Photo.

When Great Escape hired her to write the promotion for a blogging program, Catherine followed the advice and catered it to her own situation, turning an existing website she had into her own blog. With sprinklegoodness.com, Catherine features topics close to her heart: examples of goodness in the world, ideas and tips for pet travel, and creative living ideas.

With more than a decade of freelance success, Catherine is ready to reinvent herself again. Her next step: shifting away from copywriting to photography and blogging. Yet she continues to tap into the marketing mindset that landed her abundant copywriting work over the years.

“AWAI helped me understand that it’s not just about writing. You need to market yourself and get yourself out there,” she said. “When I take photos or blog, I think, ‘How can I better market to the audience?’”

For Catherine, freelancing has meant creating the life she imagines. She found the time – and the money – to indulge her interest in learning and performing jazz dancing for 10 years.

In her home office, Catherine wears whatever she wants, and works with her two dogs and two cats by her side. Now, she’s helping her husband, Matt, pursue freelancing as a comic book artist. They’ll have the freedom to pursue another of their goals – road trips with their pets.

“It’s nice knowing that we have a sense of freedom,” Catherine said. “If we want to, we can use our trailer and travel wherever we want, with our pets.”

Ready to pursue the writer’s life? Learn more about the program that launched Catherine’s career, The Accelerated Program for Six-Figure Copywriting. 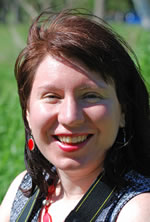 “I sent Nightingale-Conant a self-promotional package and followed up. Within six weeks, I had my first paying project. It was a very life-changing call to hear they wanted to work with me for amazing pay. I thought, ‘I don’t have to go back to a job’.”

Member:
Catherine Cairns-O'Keefe
Location:
Ontario, Canada
Other Careers:
Housekeeper, waitress
How She Got Her First Client:
Catherine crafted a self-promotional package to Nightingale-Conant that landed her first project, and years of copywriting work.
Top AWAI Programs: