Janet Grosshandler always had a story in her. But for three decades, she was focused on the day-to-day demands of working as a high school guidance counselor and teacher, and raising three sons on her own.

Janet had penned several self-help books for children over the years, but there simply wasn’t enough time in the day for more writing. When she retired in her 50s, this was her chance.

“I would finally have time to do more writing, but I didn’t know what kind of writing,” she said. “I searched around and found this thing called copywriting and thought, ‘What’s copywriting?’”

She soon learned that, by writing marketing copy for organizations, she could exercise those dormant writing muscles – and bring in some nice retirement income.

A Community of Writers – and Clients

Janet’s research turned up American Writers & Artists Institute (AWAI) as the go-to place to get started. With the Accelerated Program for Six-Figure Copywriting, she would get thefoundation she needed to build a second career and learn foreign concepts such as writing to sell.

Just six months after starting the self-paced program, Janet flew to Florida for her first AWAI FastTrack to Success Bootcamp and Job Fair. Though the information-packed event was admittedly “overwhelming” that first year, it was exactly what she needed: connections with a community of writers and potential clients.

“I landed a couple of gigs out of my first Bootcamp – advertisements and blogs for a health company,” she said.

She also joined mastermind groups, small, virtual communities of writers that support each other and provide much-needed feedback on writing samples. Through continuous practice, she honed her writing, and even won $1000 in a Bootcamp Spec Challenge.

When Janet saw an advertisement in an AWAI publication for a job with Precious Moments, she jumped at the opportunity. Already a fan of the company’s collectible figurines, Janet crafted a highly personal application – and it worked.

“I wrote a heartfelt application letter about how I’d collected Precious Moments and they flew me to Chicago for an interview,” she said. “Then, they chose me! I thought, ‘This is the big time.’”

She hit the ground running in this high-speed work environment. The job entailed not just writing for Precious Moments, but also for a sister company called Lifebook. Each day, she refined her skills with nonstop on-the-job practice and grew her portfolio with sales pages, blogs, articles, and more.

“The Precious Moments job lifted me from nearly a beginner to a true working professional,” she said.

When a company restructuring ended her job at Precious Moments, Janet was ready with the skills and samples to go out on her own. As a freelancer, this “beach baby” could even work part of the year in Costa Rica where one of her sons lives.

Copywriting provided a second income, and a lifestyle that let Janet to get back to the writing that’s closest to her heart. She vividly remembers being interviewed for an AWAI story, where she was asked, “What would be your ultimate writing goal?”

She knew the answer clearly: “I had done some work as a life coach and knew I wanted to help people – especially women,” she said.

Thus in 2012, she launched “Get Stronger, Girlfriend,” a women’s empowerment and wellness movement. The material, incubating so long within her, came out easily. “I wrote furiously all summer like I was possessed,” she said.

The creative inspiration didn’t stop there. Always a non-fiction writer, Janet began writing novels. In Costa Rica, where her son, daughter-in-law and grandbaby live, she found quiet space to write the Cath Monahan series about a woman going through big emotional changes. While not her own life story, Janet drew on her own experience years before of becoming a widow with three young sons.

Currently, Janet writes articles for women’s campaigns and various websites, and is halfway thru her fourth fiction ebook. When not writing, she competes in running events and triathlons, and volunteers to help get New Jersey women into elected office. It’s a life of her own design, and she couldn’t be happier.

“When I can slip away to Costa Rica for months at a time and still easily keep up with my business and my writing, I know how wonderful life is,” she said. “A day where I can write a bunch, run on the beach, spend time with my family, and have money show up in my bank account – well, it doesn't get any better than that.”

Ready to pursue the writer’s life? Learn more about the program that launched Janet’s career, The Accelerated Program for Six-Figure Copywriting. 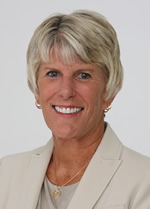 “When I can slip away to Costa Rica for months at a time and still easily keep up with my business and my writing, I know how wonderful life is. A day where I can write a bunch, run on the beach, spend time with my family, and have money show up in my bank account – well, it doesn't get any better than that.”