For Max Latimer, it’s always been about the power of words.

He sold cars, figuring out just what to say to sway the buyer. He persuasively offered tours to vacationers wanting to explore the Great Barrier Reef and other attractions in his home country of Australia.

It only made sense that, when Max chose to make a career change into copywriting, it was eight words that brought him his first writing gigs, valued at approximately $33,000 (USD).

In Love – with Copywriting

In his early 30s, Max became restless. Though selling tours was less demanding than his former job, car sales, he still had to report to work at a certain time and place on other people’s terms.

Max really wanted to start an online business he could run from anywhere, allowing him to travel. Surfing online for ideas, he stumbled onto mentions of copywriting and everything clicked.

“I kind of fell in love with it,” Max says. “I loved the idea of helping people make decisions based on things I’ve said.”

Then a contact recommended he look into programs from American Writers & Artists Institute (AWAI). But first, she offered a warning.

“She said, ‘I’m going to give you this sales page but be careful. There’s a fair chance you’ll be sucked in,’” Max recalls.

And he was. Copywriting, and the accompanying lifestyle possible, sounded like a perfect fit. Though Max initially saw copywriting as a means of promoting a yet-to-be-determined online business, he soon viewed it as a promising career in itself.

Max began his copywriting study with AWAI’s Accelerated Program for Six-Figure Copywriting while still selling tours by day. His new passion led him to read – uncharacteristically – book after book on marketing, copywriting, and psychology.

“I went from never reading a book to reading 50-70 books because I knew what I wanted to spend the rest of my life perfecting,” Max says. “It was like a fire had been lit.”

Wanting to take his skills further, Max and his girlfriend came up with a plan to invest in AWAI’s Circle of Success. CoS would give him lifetime access to all AWAI programs and a peer group of new writers to learn with.

Investing in Circle of Success would require some sacrifices, but Max had complete confidence in its value. He had spent a hefty amount in various programs over the years, but after his experience with the Accelerated Program, he saw AWAI as the real deal.

“A lot of courses I took were hit and miss,” he says. “But AWAI gave me the meat I needed.”

Max dove in, devouring programs and completing the assignments – drafting promotions and copying sales letters. He practiced his new skills every chance he could, even while crafting an email invite for a friend’s party.

“I made everything I wrote persuasive and benefit driven,” he says. “I got so many comments on the email and everyone came to the party!”

But the icing came in the fall of 2015 when Max jetted to Delray Beach, Florida for AWAI’s annual FastTrack to Copywriting Success Bootcamp and Job Fair. There, he met up with friends from his Circle of Success class and learned from a dozen or so of the industry’s top copywriters.

He expected Bootcamp to be his launching point, but didn’t anticipate the urgency of the event. Soon after arriving at Bootcamp, he received an email from his employer back home informing him that his job had been eliminated. Fortunately, a copywriting career waited in the wings.

Max soaked up everything he heard, finding the greatest value in one-on-one discussions with AWAI staff members Denise Ford and Barbara Hume, and B2B Copywriting pro Ed Gandia. “There was something about the care and attention from the staff and instructors that was genuine,” he says. “I knew I was in the right place.”

From Ed, Max picked up a piece of advice that would unlock his copywriting career. Up to then, he planned to parlay his experience into a copywriting niche in tourism. Ed, however, suggested that Max might find more opportunities in the auto industry.

Back in Australia, Max quickly rewrote the tag line on his LinkedIn page: "Direct Response Copywriter Specialising in the Automotive Industry."

Just eight words but they made all the difference. Within a few days, a gentleman from a local company sent a connection request. Max replied with a message offering assistance and links to articles by veteran copywriters Dan Kennedy and John Carlton.

A couple of days later, Max met with the prospective client, from a marketing agency that needed help with automotive copy. That same week, he connected with a second agency, a referral from the first one. The following week, Max started work for both companies.

Today, Max writes full-time for the agency that first spotted his LinkedIn profile, crafting emails, booklets, flyers and other direct mail for some of the auto industry’s biggest names. He also writes for a handful of other clients on a freelance basis. And he flexibly works from home part time.

In an industry long dependent on an old-school style of copywriting, Max brings a fresh focus on the customer – an approach he wishes he had taken a decade before.

“If I had known what I’ve learned in copywriting when I was selling cars it would have been a completely different game. It’s like a superpower,” he says. “It’s not about you; it’s about the customer.”

But Max’s real passion lies in consulting with small businesses on how to use strategy, marketing and writing tactics to grow – knowledge he has gleaned from more than a decade in sales, AWAI programs and diligent study.

“I want to help businesses get the best start before they ever make products, to start from a point of strength,” he says. “I feel like everything I’ve done has led me to this point.”

Ready to pursue the writer’s life? Learn more about the program that launched Max’s career, The FastTrack to Copywriting Success Bootcamp & Job Fair. 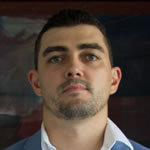 “Since attending Bootcamp, I’ve secured 45,000 (AUD) in writing gigs, and AWAI was the sole reason it happened.”

Member:
Max Latimer
Location:
Cairns, Austrailia
Other Careers:
Car sales, hospitality
How He Got His First Client:
After changing his LinkedIn tag line, an auto industry marketer connected with him – leading to a full-time job and other freelance work.
Top AWAI Programs: