By day, Peter Fogel writes revenue-generating marketing copy for alternative health and financial companies. Then he closes his computer and heads to the stage, where he stars in the national tour for one of the longest-running one-man shows in theater history.

“People can’t believe I’m starring in a show and writing copy during the day,” Peter said.

But for Peter, copywriting and acting aren’t that different. Either way, you have to connect with the audience – something Peter’s been doing for years.

Since the late ‘70s, Peter’s been a stand-up comic, actor, and writer. He’s shared the stage with Robin Williams, Rosie O’Donnell, Jon Stewart, Denis Leary, and Ray Romano. He’s appeared on HBO’s Comedy Central, and warmed up live audiences before shows such as “Married With Children.” And he’s appeared in countless commercials, including a stint as the Wisk “ring around the collar” guy.

But in 2001, show-business life was simply getting too hard to sustain. After 20 years in the entertainment industry, he faced the daunting prospect of reinventing himself.

Peter didn’t have to wait long for the answer about what to do. Just as he began exploring second careers, he received an intriguing letter from American Writers & Artists Institute (AWAI) that asked, “Can You Write a Letter Like This One?” The letter detailed how copywriters could make an attractive living writing direct response copy. For Peter, it was a clear “yes.”

“I got that letter from AWAI and it resonated with me. I thought, ‘I can do this,’” he said. “I already knew how to write for audiences.”

Peter had written for various TV shows, including Germany’s most popular sit-com (“Ritas Welt”). Why not refocus his writing skills for an in-demand, high-paying market? Plus, the anytime, anywhere flexibility of copywriting meant he wouldn’t have to give up his work in the entertainment industry; he could do both.

His first move: signing up for AWAI’s self-paced Accelerated Program for Six-Figure Copywriting. Soon after, he hopped on a plane from New York City – where he lived at the time – and headed to the FastTrack to Copywriting Success Bootcamp and Job Fair in Delray Beach, Florida, which took place just five days after the September 11 attacks in 2001.

But it’s a good thing he made it; Bootcamp ended up bringing Peter’s big break. He learned from some of the top direct-response copywriters in the field and entered a Bootcamp competition to write a letter for AWAI – like the one he’d received in the mail. Not only could he write a letter like that, but he won the competition and then some. AWAI ended up using his letter heavily for five years, bringing in more than $10,000 in royalties for Peter.

“That first AWAI Bootcamp launched me – getting help from master copywriters as I started writing my own samples,” Peter said. “This stuff works. I wouldn’t be a copywriter if not for AWAI.”

Since that first Bootcamp, Peter has been booked continuously as a copywriter (www.compellingcopynow.com). Following the event, confidence and connections from Bootcamp led to a full-time job as the in-house copywriter for James DiGeorgia & Associates, working under AWAI co-founder Don Mahoney as the copy chief.

He’s gone on to write on a freelance basis for clients such as Agora, Early to Rise, Renaissance Health and more, delivering high-response direct mail, website, and radio copy. His specialty: act-fast packages and “magalogs” of 25-35 pages.

It wasn’t easy starting a new career in his 40s, but Peter took it seriously and invested in getting the skills he needed.

“It’s scary because things change as you get older,” he said. “People are not getting hired anymore and they have to reinvent themselves – to get skills where they’re calling the shots.”

After reinventing himself, he parlayed his firsthand experience into marketable products and services (www.rebootyourcareernow.com). Peter penned two books on the topic, “If Not Now... Then When? Stories and Strategies of People Over 40 Who Have Successfully Reinvented Themselves,” and “Reboot Your Career: 27 Ways to Reinvent Yourself in the Workplace (If You Still Have a Job!).” And, he put his copywriting knowledge into the book, “DON'T GET SCREWED... On Your Next Marketing Campaign! Copywriting Secrets of the Masters That Can Boost Your Sales!”

“I don’t have a pension so I’m trying to take massive action to bring as many streams of income into my life as possible,” he said.

Reaching the Audience – in Print and on Stage

Candidly, Peter wasn’t making six figures within six months, but he did get there eventually by working hard and reaching out to prospective clients.

Peter continues to make his living primarily with copywriting, writing 9 to 5 most weekdays. But he’s also been able to maintain his entertainment career, taking his computer wherever he performs. Peter now performs in the nationwide traveling show for “My Mother’s Italian, My Father’s Jewish and I’m in Therapy.”

He finds copywriting and live performing feed each other. It’s all about the audience’s experience.

“Copywriting is two thirds of my income. It’s my day job. My night job is comedy,” he said. “Copywriting provides a solid reliable income while entertaining feeds my soul.” 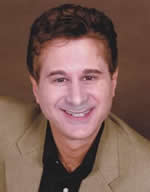 “That first AWAI Bootcamp launched me – getting help from master copywriters as I started writing my own samples. This stuff works. I wouldn’t be a copywriter if not for AWAI.”