In 2010, Steve Maurer wrote an impressive 400 articles as a freelance copywriter. Yet in bringing in just over a penny a word, the reality of copywriting differed vastly from the dream.

Copywriting was supposed to fill in the gap in Steve’s income as an industrial maintenance technician after cutbacks reduced his hours – and income – by 17 percent. And while the extra $2000 he made that year with copywriting certainly helped his family, after taxes it covered just a few bills.

But these days, Steve’s copywriting income more than pays the bills; he increased his overall annual income by 50 percent just by writing copy on the side. And he does it from home, working with clients around the world, on his own schedule.

Since 1985, Steve has been the go-to guy at a major food processing plant in Fayetteville, Arkansas, helping keep machinery humming.

When Steve’s employer, a large food processing plant, cut the maintenance crew’s hours in 2009, some of his colleagues turned to handyman work on the side. Steve, instead, looked to an unexpected source of additional income: writing.

He had written training manuals and presentations for his employer. And he had already dabbled in web writing, crafting a website that boosted his wife’s seamstress business by eight times. Plus, the flexibility of writing would t easily with Steve’s work schedule at the plant.

Steve found his first freelance gig via Craigslist – an article that paid $4.95 and took him a painstaking six hours to complete.

“My brother snickered when I made that first $5, but it was a turning point for me,” Steve says. “It proved that I could write and someone would pay me for it.”

While that content marketing site hired him for countless articles, Steve couldn’t sustain the below-minimum-wage pay. In hopes of attracting higher-paying clients, he found some free online advice and a few writing courses to sharpen his skills, but they lacked depth.

“Most of the courses I found contained general information you can find anywhere on the Internet, and lacked the ongoing support that new writers need,” he says. “I knew there had to be something better out there.”

That something better emerged in the form of American Writers & Artists Institute (AWAI), which Steve had seen mentioned repeatedly in copywriting circles. As a start, he signed up for AWAI’s Web Copy 2.0, and quickly noticed the difference in AWAI programs.

“When I found AWAI, I knew I was home,” Steve says. “The AWAI programs, compared to others, delivered more value and contained information you won’t find elsewhere. I had a whole bunch of people supporting me and I could tell that the programs were written by people actually doing this kind of work. I was learning the real deal.”

Soon after that first AWAI program, Steve joined AWAI’s Circle of Success, giving him lifetime access to all programs and entry to the annual FastTrack to Copywriting Success Bootcamp and Job Fair. He began consuming one program after another, including AWAI’s flagship online program, The Accelerated Program for Six-Figure Copywriting.

As he continued to study copywriting, Steve actively sought clients. After he handed out his business card to the owner of a local berry farm, the gentleman hired Steve to write press releases. Without hesitation, Steve accepted the job – despite never writing a press release before. He immediately turned to AWAI’s Secrets of Becoming a Publicist to gain the necessary skills.

In 2014, Steve headed to Delray Beach, Florida for his first Bootcamp, which quickly erased any doubts about his chosen path. “I got to meet some of the biggest names in copywriting, which added a lot of credibility,” he says.

Through Bootcamp, Steve connected not only with veteran copywriters but writers just like him. Several of them – from around the country – came together to form an accountability group called Coast2Coast Copywriters. Once a week, the writers meet via phone to share tips and support each other, and see each other every year at Bootcamp.

To stand out, Steve chose a niche industry to focus on: industrial copy, where he could tap into his 30 years of experience. He knows the products and services, and most importantly, he knows the audience. “I am the ideal customer, the target market,” he says.

He rewrote his LinkedIn profile and website to reflect his focus, and clients began rolling in: an electrical industry association, a software designer, a data recovery service and a specialty machine shop, to name just a few. From his home office in Fayetteville, Steve writes for clients around the globe – Australia, Canada, Germany and the Netherlands.

The $5 article now a distant memory, Steve makes around $200 an hour for his time, and has doubled his copywriting income every year since 2013. Initially, he set out to replace the income lost from hours cut at the plant; he did that – and more – with a 50 percent jump in his annual income. It’s money that raises the quality of life in Steve’s household as well as that of his parents, whom he helps support.

Steve still works full time at the plant, with copywriting during his off days, early mornings and evenings. Beyond the income, Steve enjoys the perks of the writer’s life: the ability to work from home with his wife and his grandchildren popping in for the occasional hug.

“Our goal is to have my computer clicking in here and the sewing machine humming across the hall,” Steve says. “We’re living part of our dream.”

Steve continues learning, every day. Fresh off the B2B Mastery Virtual Workshop, he’s now looking for work in case studies and white papers. And Steve gives back to other writers as the moderator of AWAI’s LinkedIn group, and as a regular guest at AWAI online and live events. As it turns out, he did make it to the Bootcamp stage.

“At this year’s Bootcamp, I gave one of the member spotlight speeches and was able to contribute to the niche panel discussion – thanks to the success I’ve had in the last year,” he says. “I shared the ‘stage’ with some of my heroes! I only wish I’d started long ago.”

Ready to pursue the writer’s life? Learn more about the program that launched Steve’s career, The FastTrack to Copywriting Success Bootcamp & Job Fair. 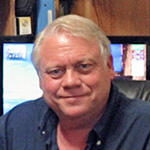 “My copywriting income has doubled every year because I’m getting better clients and better fees. And at this year’s Bootcamp,I gave one of the member spotlight speeches and was able to contribute to the niche panel discussion – thanks to the success I’ve had in the last year. I shared the ‘stage’ with some of my heroes! I only wish I’d started long ago..”

Member:
Steve Maurer
Location:
Fayetteville, Arkansas
Other Careers:
Industrial maintenance technician
How He Got His First Client:
Steve broke free from the $5-per-article content mill after mentioning his services to a local business that needed press releases – multiplying his pay per project by 50 times!
Top AWAI Programs: