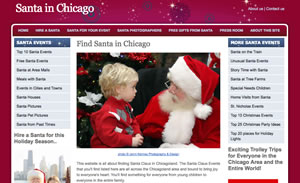 Where to find Santa Claus events in the Chicago area

To make it easy to find out exactly what kind of Santa events are available, we have listed over 375 places where you can find Santa in the Chicago area by location and by the type of event.

The very best thing about this program in a nutshell is it got me to sit down and to keep going until I had a real website up and operating.

John’s website only gets heavy traffic two months a year. But that’s enough to accomplish his primary goal: to promote his part-time career playing Santa Claus. For the past 22 years, he used to have 10 or 15 bookings as Santa Claus during the holiday season. Now he has over 50. He says he’s turning down business “right, left, and center. I’m 74. There’s a limit to what I can do.”

There’s another huge benefit … Previously, to book Santa appearances, he had to go through booking agencies, which then took a huge chunk of his revenue as their fee. Now he books himself. That means he’s earning more money for every Santa job he takes on.

His website is even helping to make him a bit of a celebrity. He was interviewed by the Chicago Tribune for a story that ran on Thanksgiving and his website was featured in Chicago Magazine.

He also has plans to write a book about his Santa experiences and believes his website will give him some added leverage when it comes to finding a publisher.

His advice to someone considering creating a Money-Making Website? “A lot of people probably think about how they can make a lot of money. Instead, the first thing you should say to yourself is ‘Where are my interests? What really grabs me?’ It’s what Nick talks about in his program.”

Learn how you can write your own Money-Making Website.

See what other opportunities AWAI has to offer.