I opened the envelope and tucked inside was a check for $12,500. To say I was a little excited is an understatement. It was money earned for a freelance copywriting project. In fact, it was my first freelance assignment.

This was also money above and beyond the initial flat fee I was paid. Even though it wasn’t technically a royalty fee, I considered it to be the same thing.

In this article, I’m going to share with you a way to get extra money from your client, particularly when they don’t pay royalties.

But let me start at the beginning.

The client was Matthew Lesko. You know him as the “government giveaway” guy. His specialty is showing folks how to get freebies from Uncle Sam. He wears that famous suit adorned with question marks and the rims of his eyeglasses are large and usually of vibrant colors. He dresses this way on purpose because it draws an awful lot of attention. He used to wear his famous question mark suit only for those times he was appearing on television. 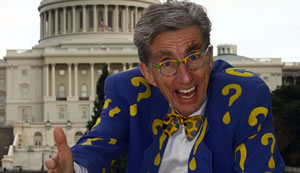 But that all changed the day he wore it to the airport. He was running behind schedule and had just left the television studio with no time to change clothes.

As you can imagine, as he walked through the airport, everyone was staring at him. When he checked-in for his flight, the attendant at the counter asked why he wore such an audacious outfit. He explained how he helped people get stuff from Uncle Sam for free or at very little cost.

She was either so impressed with his answer or simply wanted to show how airlines could do the same thing; she upgraded him to First Class for free. From that moment, he decided to make the question mark suit a regular feature of his brand.

I met Matthew at a seminar and sure enough, it was his suit that caught my attention. I managed to strike up a good conversation with him. We talked at length about marketing and copywriting. Before the seminar was over, we had exchanged contact information.

A few weeks later, he contacted me about writing sales copy to launch a new book he was releasing on government giveaways for entrepreneurs. (By the way, this is a reminder to all copywriters that patience pays off. Odds are you might not get an assignment the first time you meet a client, sometimes it just takes a little time.)

I was all-in. However, it wasn’t until the next conversation that I learned he didn’t pay copywriting royalties. Some clients don’t. In the health field, for example, some supplement companies don’t pay royalties. I suspect that’s because the costs of manufacturing and carrying inventory cut into their margins.

I was greedy and not getting a royalty seemed as if I were cheating myself out of extra money. So I asked this one simple question: Are you open to the idea of a bonus payout?

He said yes, depending on the volume of books sold. So I worked out a few bonus options based on what seemed like to me reasonable and obtainable sales goals for his new book.

I showed them to him. Now all he had to do was pick the option that worked best for his business. Fortunately for me, he picked the option with the biggest bonus payout along with the greatest amount of books sold.

Now, I’ll admit to you, Dear Copywriter, I wasn’t entirely sure my copy would sell the amount of books needed for the largest bonus payout. But I wanted that money desperately and was willing to gamble.

I also “hedged” my bet. I did a lot of research on the subject. I reviewed all of his past sales letters. I read through the testimonials he had on file. I had enough conversations with him to know his main talking points. I also knew that he had a healthy list. By that I mean, it was comprised of active buyers and he was continually growing it.

All of that work in advance paid off. We sold out his entire inventory and he had to re-order more books. He was thrilled. Of course, I was ecstatic.

Dollar signs were dancing in my head. Now all I had to do was muster up patience while I waited for the check to arrive.

Your takeaway for today: It pays to be creative when negotiating with your client. If they don’t pay a royalty, ask about bonus payouts. The thing is, if you don’t ask or suggest other options, you could be leaving money on the table.