In 2008, Chris Allsop was poised to leave her job as a university development officer for the freedom of freelance copywriting. She’d taken several programs and was on her way with a few clients.

But life threw her family a curveball; her husband was diagnosed with a brain tumor. As the family struggled with the fear and uncertainty, their financial situation deteriorated. Her husband lost his job, and in the months leading up to his diagnosis, he had incurred heavy debts in his part-time business.

“I had to put a halt on building my copywriting business as we got him back on his feet and sorted everything out,” Allsop said.

Instead, Chris stayed in her secure job, at times the family’s only income as her husband went through months of undiagnosed illness, and finally, treatment. Just as valuable, their three children could attend the university where she worked.

Chris was disheartened to scrap her plans for a full-time freelance business. But as it turned out, all the prepping still paid off. While she didn’t jump the corporate ship, she continued to build her freelance business – on the side. With copywriting, Chris was able to add about $2000 each month to her income – and slowly chip away at the debt she and her husband accumulated during his 18-month illness and recovery.

“At first I thought, ‘I’m never going to get this business off the ground,’” Chris said. “Negative thoughts came in. It took me a little while but I woke up to the fact that I could use my business as a leverage to grow personally, advance my copywriting skills and supplement my income.”

Chris had written a fair amount in her various jobs, mostly fundraising letters and proposals. She had never considered freelance copywriting until she received a letter in the mail from American Writers & Artists Institute (AWAI). The letter asked, “Can You Write a Letter Like This One?” Chris thought, “Why not?”

She began with AWAI’s FastTrack to Copywriting Success Bootcamp and Job Fair, held each fall in Delray Beach, Florida. Through AWAI events, she’s met dozens of other copywriters and taken hands-on sessions designed to get her up to speed quickly with copywriting and the business aspects of freelancing.

“AWAI helped me tremendously. It was important for me to have that good foundation first and then go from there,” Chris said. “I thought I was a decent writer prior to joining AWAI but I can’t tell you how much my writing has improved.”

Chris’ first client came through AWAI’s Bootcamp after she submitted spec work that landed her a project writing for a health business. “I seem to have gotten my clients either through specs or going to events and getting to know the person leading the event – and going out on a limb and actually submitting spec copy,” she said.

When AWAI put out a call for copywriters to assist copywriting legend, Dan Kennedy, in a major project, Chris applied, even though she didn’t have the qualifications needed to get paid for the work. However, her work led to a testimonial from Dan, which is on her website today.

Later, at Dan’s Writing for Info-Marketers event, Chris submitted more copy. Impressed with Chris’ work, he referred her to another client that has since meant thousands of dollars of work for her.

At the 2013 Bootcamp, she entered a spec assignment for a project with another luminary in the business, Clayton Makepeace. Chris beat out four dozen other copywriters to win a contract worth $12,500 plus royalties (and mentoring with Clayton) with one of Clayton’s clients, Weiss Research Inc. She again impressed Clayton, writing a complex promotion for an investment product.

“When Clayton announced me as one of people who had won spec assignments, I was like, ‘Clayton Makepeace likes me!’” she said. “I had submitted something to be one of his ‘copywriting cubs’ years earlier but didn’t make it. It just goes to show you can improve. That was an a-ha moment that I can really do this.”

Making the Time to Write

It’s not easy to fit in copywriting projects while working full time, with a commute, but Chris has juggled it since 2008. Sure, there are times when adding 25 hours on top of her day job means staying up until midnight even when she has to get up for work at 6 a.m. She fits in phone calls during lunch breaks, or shifts her workday earlier or later.

She lets clients know her situation and that it might take a little longer to deliver projects, and so far, everybody has been accepting. It doesn’t hurt that her copy gets results.

Chris admittedly struggled for a while with getting it all done, but a mindset shift changed that.

“By telling myself, ‘I don’t have time,’ I was giving up control over my situation, along with my power to do something about it,” she said. “When I stopped telling myself this negative message, everything shifted. My mind opened to new ideas and better ways to do things. I found more solutions for time troubles, and I wrote faster, too.”

Going with the “Slow”

With help from her copywriting business, Chris moved her family forward. She and her husband are now close to paying off their debt. As they reach this milestone, she looks ahead to the next phase – going full time with her business, Proven Systems Marketing. Her detour wasn’t one she ever imagined, but the journey itself changed her perspective.

“Starting to go more with the slow – instead of fighting against the situation – was one of the best things I ever did,” she said. “Life will throw different things at you along the way. Accept and then eventually find the good in whatever comes your way. That's how joy becomes possible. Your gift is this day, right now. Enjoy it.” 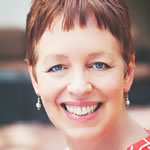 “AWAI helped me tremendously. It was important for me to have that good foundation first and then go from there. I thought I was a decent writer prior to joining AWAI but I can’t tell you how much my writing has improved.”

Member:
Chris Allsop
Location:
Windsor, Ontario
Current Career:
Full-time development officer at a university; part-time copywriter
How She Got Her First Client:
Chris submitted a spec assignment at an AWAI Bootcamp and won a project with a health industry client.
Top AWAI Programs: