You could say that car restoration is in Elias Christeas’ DNA. As the son of a car restorer, Elias learned the trade from his dad.

“There’s something pure about the experience of working in the driveway in the rain with your dad, just trying to get that car to start,” he says.

From those early days, his enthusiasm grew and focused exclusively on Land Rovers. His passion project evolved from doing mechanical work on his vehicle to opening a hobby shop to servicing, restoration, sales, and shipping vehicles worldwide. The pinnacle of his career culminated in racing one of his custom 4x4s in the Baja 1000.

To his 18-year-old self, this all seemed like a dream come true, but the demanding days in the shop wore him down, and he resented coming home all bloody and greasy.

“After a certain point, I was just like, I’ve done it, I’ve planted my flag on the Everest of four-wheel-drive restoration, the fun is gone, and it’s time to do something else,” he says.

Elias did, however, recognize the joy he found in writing sales copy for his restored vehicles. In his teens, he had admired the gifted copywriters at the “Sportsman’s Guide.” He couldn’t wait to read every issue for the wild stories, parables, jokes, and most importantly the engaging product descriptions.

For years, his wife had urged him to look into copywriting programs from American Writers and Artists Institute (AWAI), where she was already a member. But Elias was far too busy to listen – until he reached the point of desperately seeking a way out of the restoration business.

His decision to invest in AWAI and himself became a no-brainer.

“The more I dove into AWAI, their philosophy, programs, quality teachers, and vast online library, the more I saw the potential in what I was doing creatively. I saw how it could work in my niche for web pages, landing pages, and more,” Elias says.

Things began to click as he worked through AWAI’s The Accelerated Program for Six-Figure Copywriting and then the Crash Course in B2B Content Writing.

After completing Gordon Graham’s B2B Crash Course, Gordon invited Elias to collaborate on a white paper. Their collaboration boosted his confidence, earned him opportunities, and proved he could make a living as a writer.

To grow his business, Elias reached out to his buddies in the industry, explaining how he could help with their websites, social campaigns, ecommerce, and his specialty, captivating product descriptions. Once the word was out, his freelance writing gigs really took off.

“My successes come from my experiences with AWAI. The programs I took and the opportunities they made available connected me with the right people. Conversations with those people opened my eyes to more possibilities and helped pave my path,” Elias says.

Buckle Up! Sharp Curve Ahead

But Elias missed the frequent interactions with customers and colleagues. “I needed to find a better way to harness my work experience and my new passion for copywriting,” he says.

When he heard about “digital agencies” via an AWAI webinar he changed lanes and leaned into the curve.

Always one to attack a challenge, Elias set a 90-day deadline to find a position with an automotive digital agency. He went all in and joined Circle of Success (COS), which gave him access to their extensive copywriting library and an inspiring mentor.

At the 90-day mark, he landed a job as a copywriter with an automotive SEO agency. These days, he trains the creative team plus has creative impact on the technical team. It’s the best of both worlds.

When Elias was given a leadership role in marketing and sales at his agency, he took the company from a six-figure annual revenue to multi-million-dollar revenue in less than a year.

“For the first time in my life, when I’m having a tough week, instead of shutting down, I see my work sustaining me, acting as a keel guiding me through the rough waters,” Elias says.

Currently, Elias and his team at the digital SEO agency are expanding the business beyond automotive to include other industries such as wellness and pharmaceutical. The agency’s unprecedented growth is due to Elias’ flair for blending creative storytelling with results-driven, SEO-optimized copy.

Through his writer’s life, he’s uncovered his best self. His work is invigorating instead of draining. He now spends his days engaged with talented, creative, and technical specialists in a positive environment.

Achieving a new level of happiness and freedom in his life, Elias uses some of his newfound time to pay it forward and help others reach their goals. His flexibility also allows him to travel with his family so that his kids may discover their paths and live without boundaries.

Because he can write from anywhere, Elias and his wife searched for a “better Los Angeles.” After traveling to many US states and even Australia, his family discovered Florida’s gulf coast. They now love life among the palm trees and sunsets without all the smog and traffic.

Now, Elias even has time to write poetry. Specifically, he likes the Haiku form for the challenge of saying as much as possible in the fewest words.

“I went from a place of doing something that I deeply loved, to hating it, through a process of redefining and discovering myself to a place where I’m really happy,” he says. “I wake up every day knowing that my work truly makes me happy. It’s as simple as that.”

Learn more about the program that launched Elias’ career, The Accelerated Program for Six-Figure Copywriting 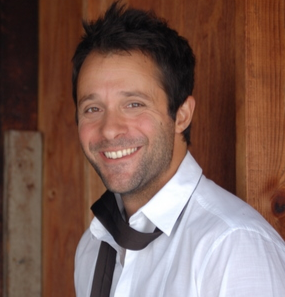 “For the first time in my life, when I’m having a tough week, instead of shutting down, my work sustains me, acting as a keel guiding me through the rough waters.”

Member:
Elias Christeas
Location:
Sarasota, Florida
Other jobs:
Restoring and selling vintage Land Rovers
How he got his first client:
Elias reached out to existing contacts, his “buddies” in the automotive industry, with ideas for website updates, social campaigns, and ecommerce.
Top AWAI Programs: