When Heather Robson first started her freelance writing business, she split her time between working with clients and homeschooling her two children.

On a typical day, she would write for a few hours in the morning before breaking for lunch with her family. By then, she’d already made a few hundred dollars – or more.

With her work mostly done for the day, she would sit down to teach her children history, science, and literature.

That was the freedom freelance writing afforded Heather while she was raising her kids. Earning an income… homeschooling…writing novels.

“Without this career, I wouldn’t have been able to homeschool,” she said. “I might have found a way to do it, but it might have been painful and frustrating where this was very liberating and carefree.”

Heather and her husband designed a life that balanced work, family, and personal enrichment – a balance that wouldn’t be possible with regular 8-5 jobs. It looks a little different these days, but that core balance is still there.

Freelance flexibility is pretty much the only lifestyle Heather’s children have ever known. Her oldest daughter was just two when Heather began copywriting.

Prior to starting her business, Heather penned technical materials in house for a hearing aid company. It was a secure job, with benefits, but Heather was itching to write about something new. The answer came in the form of something Heather had never heard of before: copywriting. Her father had received a letter from American Writers & Artists Inc. (AWAI).

“My dad called one day to tell me he had received this great letter that he was going to pass on to my brother,” she said. “I was thinking, ‘This sounds like something I would want to do!’ That’s when I discovered marketing writing and copywriting. I thought it was the perfect fit because I enjoy talking to people and being persuasive – and this type of writing could earn me a nice income.”

Heather invested in AWAI’s Accelerated Program for Six-Figure Copywriting. But with her first
baby on the way, she chose to stay in her job a while longer. When the family wanted to move to Montana, they saw it as their chance to make a go at freelancing. They headed to Big Sky Country with all their belongings and a lot of hope.

“My husband and I both left our stable jobs to try to make freelancing work,” she said. “There were moments when we thought, ‘We’re totally insane!’ But there’s something to be said for putting that kind of pressure on yourself when you’re young.”

Indeed, Heather and her husband, Toby, got their freelance careers off the ground. Heather applied the marketing lessons she learned through AWAI to her business and her husband’s, and they grew their careers while also growing their family. The key: consistent marketing.

“We made it work, but it took two years,” Heather said. “Part of the rockiness of getting started was that I landed my first couple of clients so easily. Then later, when they didn’t come as easily, I didn’t stick with my marketing as I should have.”

Despite inconsistent marketing efforts, Heather landed clients and mentors, including direct- response copywriting legend Clayton Makepeace who worked with her on a package for Weiss Research, and Don Mahoney who brought her on as a content marketer for Chesapeake Nutraceuticals. She also became the Managing Editor for AWAI’s Wealthy Web Writer.

Heather found face-to-face events provided the biggest payoff in her new business. She attended AWAI’s annual FastTrack to Copywriting Success Bootcamp and Job Fair and the AWAI Web Copywriting Intensive. At the latter, she bumped into Mark Everett Johnson, a noted speaker on copywriting and the former creative director for the publishing powerhouse, Rodale.

“I had no idea who I was talking to,” she said. “By the end of the conversation, he decided that he wanted to work with me somehow, and he later got back to me when he had a project in mind.”

That one conversation with Mark led to countless projects together over the next six years with American Lantern Press, publisher of Independent Living News.

That exact approach became the formula for how Heather expanded her business and her income: Build relationships – regardless of whether they will lead to work or not.

“My favorite way to market is to get in the room with people and talk,” she said. “What are they doing now? What are they excited about and frustrated with? And then, ‘What can I do to help?’”

When it came time to choose a copywriting niche, Heather didn’t settle on just one. Opportunities and interests led her to the alternative health, privacy, and survival markets. She since written about topics ranging from emerging technologies like augmented reality to commercial ventilation to psychedelic mushrooms.

Saying “Yes” to it All

Though Heather was an in-demand copywriter, she opted to work less than full time while her kids were still of “homeschooling age.”

For middle school and high school, both of Heather’s children attended local public schools… and have since graduated.

That’s given Heather some opportunity to change up her work schedule and try new things.

“My kids were only little for so long,” she said. “Because of that, I was never willing to put in more than a certain amount of work while they were growing up. Thanks to freelancing, I got to be present in their lives in a way I wouldn’t have been with a traditional career. I loved that.”

“I still try to make a lot of time for family. My older daughter and I get together for breakfast or dinner, just the two of us, regularly. And my younger and I are learning bouldering together. We also host big family dinners at least once a month with grandparents and my brother.”

While she sets aside time to focus on family, Heather is working more hours than she used to. That fact is largely due to her passion for UX copywriting.

“Since I discovered User Experience in 2017, I’ve been hooked. It’s been like meeting my writing soul mate. Because of that I spend more time working, developing training materials and teaching. It’s very fulfilling!”

What makes her productivity even more impressive is that she realized a childhood dream of becoming a novelist. In 2013, she released her first book, Flight, part of a modern fantasy series called The Alchemists of Galena. Just one year later, she released the second book, Rescue. And a few years after that, she released the third book, Betrayal.

“If I’m holding to my goals, then I get up at 6 am and my first hour goes to writing.” Effectively, one hour of writing each day produces a book in about a year. Heather acknowledges that it’s easy to let this me-first approach slip in the face of client projects. But if she sticks to it more often than not, she sees good progress on her personal projects, and that’s very motivating.

Overall, Heather tries to stay flexible. With a loosely organized schedule, she’s free to say yes to family or friends whenever something fun pops up.

“I really try to never say no to family time,” she said. “If something is on the table to do as a family, I try to be a yes man… so to speak.”

It seems Heather has found a way to be able to say “yes” to just about anything she wants to do, while maintaining a mix that works for the family as well.

“I get to do the things I enjoy and that are important to me,” she said. “At the end of the day, I’m happy with what I’ve accomplished.” 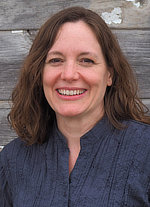 “My kids are only this age for so long. Because of that, I’ve never been willing to put in more than a certain amount of work. One of the big things about freelancing for me is that I can homeschool my kids through sixth grade.”

Member:
Heather Robson
Location:
Boise, Idaho
Other Careers:
Technical writer
How She Got Her First Client:
Through a post in AWAI’s The Golden Thread newsletter, she landed an AWAI project requiring design, copywriting, and editing. She got her foot in the door, and showed she was reliable and easy to work with.
Top AWAI Programs: