Since taking a creative writing class in high school, John Torre has been published in short story magazines, seen his one-act play performed on stage, been a national semi-finalist for a screenplay contest, and even taught science fiction, fantasy, and horror writing at a local community college for eight years.

But to earn a reliable living with writing might as well have been fantasy too. Instead, the New Jersey native worked in sales and engineering in the construction industry, built up a vending business, and served as an administrator at a nonprofit for at-risk teens. He was good at whatever he did, but – with the exception of the young adults he helped – he wasn’t passionate about the work.

“I was tired of trading time for a paycheck,” he said. “I was always writing creatively on the side, but never thought I could make enough of a living to support my family.”

But then a door opened. While working at the nonprofit, John volunteered to help with the organization’s writing needs, including grant proposals and fundraising letters. He had begun his copywriting career, but just didn’t know it.

His persuasive copy caught the attention of a co-worker’s wife, who owned her own web design firm. “She approached me and asked, ‘Would you consider writing copy for websites?’ I said, ‘I don’t know anything about it, but sure, let’s take a look.’ She gave me a project, which led to another and that’s how I got my start.”

Those first projects were eye-opening; John could make money writing. But for copywriting to work as a career, he needed more guidance and a plan. That’s when an online search led him to American Writers & Artists Institute (AWAI) and its Accelerated Program for Six-Figure Copywriting, a self-paced program to learn how to write persuasive marketing copy.

As John completed the program, he continued part time at the nonprofit and kept 20 vending machines stocked with snacks and drinks. Then he attended his first AWAI FastTrack to Copywriting Success Bootcamp and Job Fair. Each year, the event brings together aspiring and successful copywriters in Delray Beach, Florida.

“Bootcamp went above and beyond on value with heavy-hitter speakers and program content,” John said. “I took a ton of notes that I still go back to today. I also made a lot of contacts that I maintain.”

At Bootcamp the following year, John took part in the Spec Writing Challenges offered. His writing caught the attention of one of the lead instructors, who selected John to write a direct sales letter for a men’s supplement.

“I already had confidence in my abilities as a writer, but winning the Spec Challenge in 2008 really validated my abilities and gave me more credibility in the business,” John said. “Seeing the final letter for the project was one of my proudest copywriting moments. Hundreds of thousands of people would be reading my copy.”

But where John started – in web copywriting – was where he wanted to focus his efforts. Another assignment came from AWAI President, Rebecca Matter, this time to write a promotion for Nick Usborne’s AWAI program, Web Copywriting 2.0, The assignment helped him hone his skills and further learn how to write web copy that converts.

To date, John has written for more than 80 websites for all types of organizations. He also shares his web writing know-how on AWAI’s Wealthy Web Writer site, and served as a pro-reviewer for assignments completed by members working through AWAI’s Accelerated Program. Other assignments include writing for Dale Carnegie Training, for which he writes 10-12 blog posts every week, optimized web copy for high-end car dealerships and consumer electronic companies, and direct mail promotions for a variety of products.

Defining His Own Writer’s Life

The switch to copywriting gave John the chance to do what he loves most – write.

“I made the transition from the daily commute and making money for someone else to making money on my own terms,” John said. “I remember one day working on an copywriting assignment at our beach house, enjoying an ocean breeze and the invigorating scent of salt air and thought, ‘This is what it’s all about.’”

But John’s flexibility took on even more meaning when his mother, now 93, began having health problems a few years ago. After a routine trip to the doctor, she ended up in the emergency room for testing. In the months that followed, she was shuttled back and forth between the hospital and a sub-acute rehab facility as she struggled with numerous ailments as well as a broken hip.

During all that, John was at the hospital at least twice a day to help keep track of his mother’s health care.

“Had I not taken the initiative to be a freelance copywriter and pursue the writer’s life, I don’t know how I would’ve managed my mom’s care,” he said.

Additionally, John continues his creative writing – this time a screen play he hopes to finish soon. “I have to get my screen play completed,” he said. “My muse won’t let me go until I get it out. If I realize the vision I have for this, it should be very strong, and help people see themselves and the planet in a new light.”

As for copywriting, John is turning his attention and skills to bettering the world. He refocused his business on writing for nonprofits and even snagged the domain, fundraisingcopy.com, which is currently under development.

“I want to make a difference in the world and I think appealing to people’s emotions for a just cause is the most effective way of doing it,” John said. “I think my real strength lies in storytelling and that’s what writing for nonprofits is all about, telling the story of a cause where somebody or something needs help.”

Learn more about the program that kicked off John’s career,
The FastTrack to Copywriting Success Bootcamp and Job Fair. 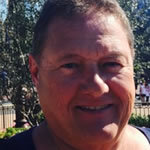 “I made the transition from the daily commute and making money for someone else to making money on my own terms. I remember one day working on a copywriting assignment at our beach house, enjoying an ocean breeze and the invigorating scent of salt air and thought, ‘This is what it’s all about.”

Member:
John Torre
Location:
North Brunswick, New Jersey
Other Careers:
Sales and engineering, vending routes and nonprofit administrator
How He Got His First Client:
John got the chance to write web copy for a co-worker’s wife after she took notice of his copy.
Top AWAI Programs: