Bootcamp: The Six-Figure Boost for this Newbie Copywriter

On a summer morning in 2013, Julie Hassett had just completed her usual commute to her financial job in Los Angeles when a chance happening changed the course of her life.

“It was 5:30 a.m., and I was so tired. I didn't want to be there,” she said. “In the elevator, I was watching the TV screen and a news blurb came on about how copywriters can make $100,000 a year working from home. The idea that I could earn that kind of money… and not have to come into an office anymore got me really excited.”

Whether it was coincidence or kismet, Julie took it as a sign. A friend had suggested copywriting to Julie previously but she had never seriously thought about making a living with writing. Now, it was time for a change.

After that serendipitous elevator ride, Julie called her copywriter friend, who recommended starting with courses from American Writers & Artists (AWAI).

She dove in, beginning with the Accelerated Program for Six-Figure Copywriting. Soon after, she joined Circle of Success, giving her lifetime access to all AWAI programs.

“I was ready,” she said. “I had joined other programs in the past and not followed through, but I made a commitment to AWAI as if I was going back to school.”

Within the year, Julie would ditch her 1-2 hour daily commute and 5:30 a.m. elevator rides, crack the six-figure mark for the first time, and find herself working from a beach house in Baja.

While still working full time in sales for a major bank, Julie got her first copywriting client. Her real estate agent hired her to write blog posts to generate traffic for her website. But the real kickoff to her career came at the FastTrack to Copywriting Success Bootcamp and Job Fair, AWAI’s annual event in Delray Beach, Florida.

Julie arrived at Bootcamp admittedly anxious. When she was in her 20s she had spent years on stage and in front of the camera as an actress, but as a brand-new copywriter at Bootcamp, she was out of her comfort zone.

“I was so nervous at that first Bootcamp,” she said. “I didn’t know anybody. But I quickly discovered what an incredible community of people these freelance copywriters are.”

“A huge change took place for me at Bootcamp,” she added. “I really felt like I found my people. I found confidants, coaches and referral sources.”

As she did with the online programs, she committed herself to getting the most out of the event. She sat up front, asked questions, thanked instructors and honed her skills by taking on multiple spec assignments. And one evening, she surprised herself by pushing her fears and insecurities aside. In the hotel bar, she approached a group of three instructors – all well-known industry copywriters – and asked to join their table.

“I thought, ‘When will I have this opportunity again?’” she said. “For me, it was about going outside of what I was comfortable with – breaking those boundaries.”

Investing in relationships at Bootcamp paid off in paying projects. Julie struck up a friendship with a representative from EscapeArtist, who hired her to write for them.

A few months after Bootcamp, she got a call from InvestorPlace Media. A spec assignment she wrote at Bootcamp got their attention and landed Julie her first full financial sales letter. Her letter went on to beat the company’s longstanding sales letter in a marketing test. And they were able to now alternate between their highest-performing promotion and Julie’s.

In another major return on her Bootcamp investment, the investment website, Motley Fool, contacted Julie to write a sales letter for them too.

Julie had returned from Bootcamp ready to quit her full-time job and commit completely to copywriting, but her bosses weren’t ready to let her go. They arranged a part-time schedule so she would stay on while still pursuing her new career. But three months after Bootcamp, with work steadily coming in, she quit her job – and the tough commute – for good.

The Architect of Her Day

“The Money Morning team is at the top of their game,” she said. “It’s the best place I could be.”

As 2014 wrapped up, Julie was set to bring in six figures for the first time, just 10 months after going full time as a freelancer and considerably more than she was making in her old financial job.

But more than earning a higher income, Julie created an entirely new lifestyle. Untethered from any office, she decided to spend the spring and summer in Baja, renting a house with an ocean view.

When she worked eight hours in an office and commuted 1-2 hours a day, she rarely found time to exercise. Now, she works out nearly every day.

“I’m the architect of my day and I can fit in all the pieces I want,” she said. “With royalties, I’m not just trading hours for money anymore. The potential is ultimately limitless. Besides the money and freedom, I didn’t realize that I would love copywriting.”

Ready to pursue the writer’s life? Learn more about the program that launched Julie’s career, FastTrack to Copywriting Success Bootcamp and Job Fair. 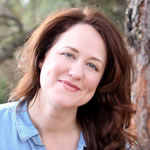 “I’m the architect of my day and I can fit in all the pieces I want because I’m not just trading hours for money anymore.”

Member:
Julie Hassett
Location:
Los Angeles, CA
Other Careers:
Actress, financial sales
How She Got Her First Client:
Julie mentioned her copywriting plans to her realtor, who hired her to write blog posts to boost website traffic.
Top AWAI Programs: