To Parent and Pivot, Engineer Finds Flexibility in Copywriting

Logic, control, a linear path — these are traits we associate with engineers.

But for veteran engineer Kristen Stelzer, the path to copywriting success was not so direct. Her 20 years of civil engineering positions had focused on residential and commercial land development. She progressed to cellphone towers and 5G technology. Then she was laid off.

So what stopped her from just getting another engineering job? The grueling commute in the Washington, DC, area meant 7 a.m. to 7 p.m. workdays. Now that Kristen had a young child, those 12 hours outside her home each day had become unacceptable.

“I half-heartedly tried looking for another job,” she says, “but I was thinking: I just don’t want to do this.”

An email from American Writers and Artists Institute (AWAI), a leading training organization for writers, had caught Kristen’s eye while she was still employed. “The process of writing and the tools you can learn — it’s all logic,” she says. “That whole flow of information just works for the way my brain thinks.” AWAI’s volume of work and the number of programs offered made it clear to Kristen that the company knew what it was doing and was invested in seeing people succeed.

Intrigued, she ordered the flagship program, The Accelerated Program for Six-Figure Copywriting, but soon determined that writing long-form sales letters was not the right fit for her. Looking further into AWAI, she found the B2B program presented by Steve Slaunwhite.
“When I started reading about B2B, that seemed like a better fit for me,” she says. “So I started studying that, thinking it could be a side hustle for extra income.”

But after the layoff she needed to earn more than a little extra. She needed to earn good money but still be flexible enough to share parenting responsibilities with her husband. This is when she began to think about copywriting as a business.

First some unlearning had to happen. The logical pattern in which engineers are trained to write meant long sentences and passive language. She learned to simplify the language and sentence structure.

Community, Contacts in Circle of Success

Second came the investment. Once Kristen decided that copywriting would be her livelihood, she looked for the best ways to hone her skills.

She went right to the top, joining AWAI’s highest level of learning, Circle of Success (COS). There, she found a community of serious writers, including fellow engineer Keith Trimels, who began to mentor her and connect her with a couple of clients. One of his recommendations led to a project with IBM.

Most of the people Kristen met through COS helped in some way — put her onto a job or introduced her to someone else who helped.

Though Kristen was initially reluctant to connect with her former colleagues, it made sense to prove her writing abilities in an arena she already knew.

“When I started my business, I reached out to everybody in my network and said, ‘This is what I’m doing. If you know of anything...’”

Through existing relationships, she landed work with an attorney in telecom and an engineering firm in telecom development.

“I wish I could have built things up while I still had a regular job. It would have taken more time but I would have felt a lot more secure,” Kristen says. “But in actuality, I’m probably further along than I would have been if I hadn’t just jumped in and learned to swim because there was no alternative.”

After beginning with basic blog posts for clients, Kristen recognized her preference for longer pieces like white papers and articles — but she had no samples to offer potential clients. Turning again to AWAI, she signed up for The Ultimate White Paper Mentorship Program, taught by Gordon Graham, in the fall of 2019.

The 12-week program finished with a white paper spec challenge. Though Kristen had never written a white paper before, she tackled the challenge — only to have a large project from a client land on her desk just when she was working to meet the spec challenge deadline. And the paper itself was not going as smoothly as her logical mind thought it should.

“The metaphor that brought it all together didn’t pop into my head until very close to the end, so I was scrambling,” she says.

With her work pattern so disrupted, she didn’t see how her white paper would work. She wavered. She considered not turning it in. Thank goodness she did, because her paper won the $5,000 prize.

After starting with telecom clients, Kristen broadened to writing technical content for a variety of industry-related clients. Her niche is types of writing — technology-related white papers, case studies, and long articles — rather than a specific industry.

The white paper win and AWAI certification as a White Paper Specialist opened the door for inquiries and projects from industry clients.

For Kristen, certification communicates “I can.” Her law student years and two decades in engineering taught her that credentials matter. So now, if a moment of uncertainty about her capabilities pops up, she turns to her certification.

Flexibility When It Matters Most

Thanks to AWAI, Kristen’s built a sustainable, in-demand career. Most important, however, are the ability to control her time and the flexibility to shift at a moment’s notice — critical benefits during the COVID-19 pandemic.

“I could take on as much work as I wanted — or take less when I had to parent or rearrange my schedule,” she says. “Managing my own time in my own way, and what that means in terms of less stress — it’s just huge.”

Are you serious about making money from copywriting? Learn more about AWAI’s highest level of learning, Circle of Success. 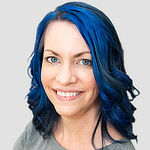 “I could take on as much work as I wanted — or take less when I had to parent or rearrange my schedule. Managing my own time in my own way, and what that means in terms of less stress — it’s just huge. ”

Member:
Kristen Stelzer
Location:
Silver Spring, Maryland
Former Career:
Engineer in land development, cellphone towers, and 5G.
How They Got Their First Client:
She connected with former colleagues and found projects in an arena she already knew.
Top AWAI Programs: