Incapacitated by clinical depression, her car hurtling toward the tree that would end it all, Pauline Longdon had a blinding moment of clarity.

Minutes before, she had been a highly respected Major in the Australian Army. She trained trauma nurses and doctors in field hospitals, and poured herself into empathetic care of the most broken in the ICU and trauma units.

Now she had lost it all. Major depression had stolen her career, her identity, her future dreams, her ‘why.’

A few seconds before she was due to slam into the tree, an inner voice boomed, “Stop!”

Pauline braked, her car’s bumper inches from the tree.

Recovery… and Then a Roadblock

Thousands of people who have been inspired by Pauline’s story are grateful that she listened, that she took the steps and mastered the skills to live beyond depression.

“I decided to own a different mindset,” is how she sums it up, in her own inimitable style.

She began teaching others what she had learned in the laboratory of her own recovery.

As her complementary healing modalities practice began to take off, she hired an agency to create some marketing materials for her.

The copy they produced was appalling, but when Pauline asked for a re-write their response was, “If you think you can do better, do it yourself.” So she did.

Then, as that business hit an insurmountable roadblock, for the second time she faced a massive loss of ‘why.’

With nothing to lose, Pauline went to the foremost direct response marketing agency in Australia and asked for a job. The owner wasn’t interested. He already had 15 copywriters, and “women don’t make good copywriters,” he said.

Pauline pushed back, daring him to give her a chance.

Her very first draft shocked the agency’s owner and changed his mind about women copywriters.

From there, she took on every job he offered, and figured out on the fly how to write that particular kind of copy.

“It was like baptism by fire, but it really made me able to just take on anything and not be afraid,” she says.

A Strategy for Success

In 2014, after closing her alternative healing practice and starting work with the agency, Pauline learned about a premier copywriters’ event in the States.

It was halfway around the world and she wasn’t flush with money. But she was determined to do whatever it took to become the very best copywriter she could be. So she borrowed the money to go.

At the event, she met many of the A-list copywriters of the direct marketing industry. There, she committed to her strategy for success: keep showing up strategically, keep putting yourself out there so they notice you and accept no excuses.

Here she learned about American Writers and Artists Institute (AWAI), the world’s leading organization for training and mentoring writers. And she met Katie Yeakle, CEO of AWAI.

Katie asked if she had done The Accelerated Program for Six-Figure Copywriting. “No,” said Pauline, and Katie’s response was, “Do it.” So Pauline did.

As an experienced writer, was she offended? No. She says it was like having your parents teach you to drive, and then you take driver’s education and discover how to do it properly and why.

A couple of months later, she signed up for the Circle of Success (COS), giving Pauline access to all AWAI programs.

“I didn’t look back, because basically, it was such a no brainer: for me it was like having the keys of the kingdom,” she says.

The program offered her an endless supply of training, mentoring, and a dedicated community of fellow writers committed to her success.

“AWAI’s Circle of Success has been one of the best investments I’ve made in my copywriting career,” she adds. “Being trained by A-list copywriters has helped to accelerate my career.”

Isolated in Australia, she had had a few coaches but no mentors, and even fewer female role models. When she discovered AWAI’s Professional Writers’ Alliance (PWA), it was like she had found her tribe. And she uncovered an abundance of female copywriters, who she says, “weren’t just good, they were freakin’ good!”

It’s About Showing Up

The next year Pauline came back to the States for her first FastTrack to Copywriting Success Bootcamp and Job Fair. She’s attended every Bootcamp since — at significant personal expense — because it’s about showing up. And putting yourself out there.

“I entered as many spec assignments as I could,” she says. “I actually won one. So that put me up in the spotlight straight away, up on stage, collecting a check of $1000… and showed that I could actually write.”

Part of “showing up,” for her, means being present 100% of the time, physically, mentally and emotionally.

“If you’re working on something else at an event, then you are distracting yourself from getting the material, the learnings, everything else,” she explains. “That’s going to affect every client in the future — because you may miss the very thing you went to that event for, by not being present.”

Thus she has chosen to be mentored by many of the greats in copywriting, since she knows there is always something she can learn from another writer that will help her reach her readers at a deeper, more emotional level. And she pays it forward by mentoring other emerging writers.

She is proud to be one of Parris Lampropoulos’ copy cubs and has been training with him for several years, taking her skills to an even higher level.

When you talk with Pauline about her definition of success, she grounds it in an unshakeable ‘why.’ She asks of every opportunity, “Does this help me reach the goal or is it just a distraction?”

For her, it’s not about making a six-figure income (although she’s already there. And well on her way to 7-figures).

In part, it has been about achieving the coveted flexibility that brings many writers to AWAI in the first place. The freedom to take her business with her anywhere at any time. The freedom to be there for loved ones when they need her, such as her parents.

Her bigger measure of success is intangible and future-oriented. She always asks, “How will this decision affect my future self? Twenty years from now?” That’s her unshakeable ‘why.’

Are you serious about making money from copywriting? Learn more about AWAI’s highest level of learning, Circle of Success. 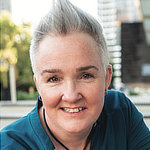 “AWAI’s Circle of Success has been one of the best investments I’ve made in my copywriting career. Being trained by A-list copywriters has helped to accelerate my career.”

Member:
Pauline Longdon
Location:
Brisbane, Australia
Former Career:
Nurse in Australian Army, complementary healing modalities therapist
How They Got Their First Client:
She landed work with the foremost marketing agency in Australia after daring the owner to give her a chance.
Top AWAI Programs: