When Sean McCool needs to fill his gas tank, he doesn’t think twice. He simply tops it off.

But this simple act means so much. It’s just one small reminder that life has changed for Sean and his family.

“In the last four years, never once have I had to think about whether to fill up my gas tank,” he said. “The money’s there. But I remember when we were scraping, and we’d get a couple dollars in gas just to get through to the next check.”

For years, Sean and his family rode an exhausting cycle of survival as he bounced from one job to another, just trying to pay the bills, never mind finding meaningful work.

But today, their financial situation has pivoted 180 degrees. He and his family own a nice house and cars, and take vacations – even with Sean working less than full time. He found a prosperous career in just about the last field he ever expected: writing.

In middle and high school, Sean failed English class – twice. After high school, he tried a couple of years of college, but flunked out.

He decided to enlist in the U.S. Army, where he spent three years. Upon leaving, his experience as an infantryman in The Old Guard was rewarding – presiding at thousands of ceremonies in the nation’s capital – but it didn’t translate to the job world.

“I was doing anything to survive,” he said.

When he finally did well, nearly reaching an income of six figures, he admittedly “wasn’t ready for it.” Overextended, his family lost everything in bankruptcy.

Somewhere along the way, Sean received a letter from American Writers & Artists Institute (AWAI) promoting its programs on copywriting. Despite his poor showing in English classes, Sean actually liked writing. But could he make a career out of it?

Seeing a possible avenue, he scraped together the money in 2003 to invest in AWAI’s self-paced Accelerated Program for Six-Figure Copywriting. But before he could dig into the course, he started working with his father in the construction business.

Still mulling over a career in copywriting – but skeptical – he attended his first AWAI FastTrack to Copywriting Success Bootcamp and Job Fair, the organization’s flagship annual event in Delray Beach, Florida. But Sean returned home not yet ready to move forward.

Ironically, it was Sean’s new copywriting skills that helped him grow his new handyman business in 2006. He invested the balance of his checking account - $26 – to print and circulate flyers he had written.

“I took what little I knew about copywriting and wrote a one-page flyer with key persuasion elements,” he said. “I spent $16 on printing the flyers and the $10 I had left on gas. I targeted neighborhoods that were just the right age to need some repairs. The next morning, I got a call to paint someone’s basement for $1000.”

For two years, he “rinsed and repeated,” to keep the handyman work flowing until one day he’d had enough.

“It was a really good week as a handyman. I made $8,000 installing floors for 80 hours on my hands and knees,” he said. “I realized this was as good as it was going to get and there was no way to sustain it.”

That same day or week, Sean received a promotion from AWAI: the opportunity to join Circle of Success, which would give him lifetime access to all AWAI programs, including Bootcamp.

“The flyers I wrote paid our bills. I thought, ‘Maybe I can do this.’ Right then, I decided that by 2009 I would be a copywriter, come hell or high water.”

Sean returned to the 2008 Bootcamp a different man. He soaked up the information and even surprised himself when a spec piece he submitted won him $1,000 in new project work with AWAI – enough to pay for his hotel with some leftover.

Even more validating, his winning spec assignment caught the attention of companies at the event, opening the door for work with leading info-marketers, Net Profit Explosion and Stansberry & Associates. After completing projects with both in the months following Bootcamp, Sean found himself in an unexpected spot; four months after Bootcamp, both companies offered him jobs within the same 15 minutes.

“The relationships formed through AWAI ended up being huge for me,” Sean said. “Without Job Fair at Bootcamp, I couldn’t have gotten in front of contacts as easily. Those clients paved the way for hundreds of thousands of dollars of work.”

A Money-Maker for Clients

Sean ultimately chose to join Stansberry & Associates Investment Research at its Baltimore offices, where he worked for more than a year. But his family’s heart was back in Tennessee.

There was no question about what Sean would do next. He had the skills, experience, contacts, and confidence, to be an independent copywriter. It didn’t hurt that soon after leaving Stansberry & Associates Sean won AWAI’s $10K Challenge again.

Clients call him again and again for one primary reason: he makes money for them. He beat one client’s control by a stunning 51 percent. He grew another client’s subscriber list by 2,000 names in just 30 days.

Clients gush about Sean’s ability to intuit what prospects are thinking. In truth, he just gets in there and does his homework and writes clearly for the market.

Since going out on his own, Sean’s income varies month to month – but it’s never dipped below $10,000 in a single month. Last year, he grossed more than $200,000. Those are numbers he never expected to see, especially working a less-than-full-time schedule.

On a typical day, Sean writes until 11:30 a.m., and then heads to a CrossFit class for a couple of hours. He fields emails and makes phone calls for a bit in the afternoon.

The high income and flexibility of the writer’s life have completely changed life for the McCools, who homeschool their daughter. They take vacations in the off-season, and they recently picked up to move from Knoxville, Tennessee to a town north of Chattanooga to assist as their church builds a new location. Sean’s work flexibility also allowed him to spend a few precious months helping his mother when she was battling the final stages of cancer.

And, the McCools have a level of financial security they’ve never known.

“A huge a-ha moment was when we realized we had left a $2500 royalty check on the kitchen counter for two weeks before we got around to taking it to the bank, and the bank’s right around the corner,” he said. “It used to be, ‘we have to take a $50 check to the bank, now!’”

Learn more about the program that kicked off Sean’s career,
The FastTrack to Copywriting Success Bootcamp and Job Fair. 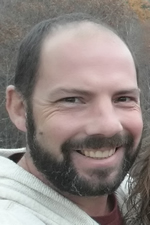 “The relationships formed through AWAI ended up being huge for me. Without Job Fair at Bootcamp, I couldn’t have gotten in front of contacts as easily. Those clients have amounted to hundreds of thousands of dollars in work.”

Member:
Sean McCool
Location:
Chattanooga, Tennessee
Other Careers:
Handyman, factory work, trade show displays, annuity sales
How He Got His First Client:
Sean landed a project with a friend to write an advertorial for a local in-home water treatment company – closing $100,000 in sales for the client.
Top AWAI Programs: