Writing – to sell – was about the last thing Jerry Bures ever expected to do.

But the longtime air systems engineer, and self-described “farm boy from northern Wisconsin,” faced an uncertain future with industry downsizing in the mid-2000s. When work dried up, his employer put him on temporary leave – twice.

On top of job uncertainty, Jerry and his wife encountered new challenges at home. When their special-needs son required occasional hospital stays, Jerry had to take time off to stay home with their other children.

In the midst of it all, Jerry received a letter in the mail from American Writers & Artists Institute (AWAI) with a question that gave him pause: “Can You Write a Letter Like This One?”

The letter detailed how he could earn a healthy income and have the freedom to work from home – with copywriting.

But direct response writing for companies? This engineer didn’t think he was wired for sales. But as he took a few months to ponder this path, the proposition proved too compelling.

“No one tells you you can make $100,000 with children’s literature, but that was a possibility with copywriting,” Jerry says. “And I thought, ‘What would it be like to work from home?’ I could control my family life a lot better.”

Although his employer had hired him back, Jerry forged ahead with copywriting, which he saw as a form of insurance for future downsizing. He decided to invest in the program that has launched hundreds of careers, AWAI’s Accelerated Program for Six-Figure Copywriting.

While actively working through the online program, Jerry was – once again – put on temporary leave at work. This time, he saw the glass “half-full;” he’d have more time to dedicate to learning copywriting.

Admittedly, Jerry felt a bit daunted after beginning the Accelerated Program. Sales and marketing concepts were completely new to him. The key to getting over that hurdle: dogged determination.

“The good news is, I am quite the persistent student,” he says. “Whenever doubt crossed my mind, I would dig in and see little bits of progress that told me I could do it.”

When Jerry’s former employer reached out again about bringing him back on, Jerry declined. Tired of the roller coaster, he was now committed to copywriting.

A Leap of Faith: Bootcamp

That same year, Jerry ventured out of his comfort zone to attend his first FastTrack to Copywriting Success Bootcamp and Job Fair, an annual AWAI event in Delray Beach, Florida. Here, he joined other aspiring copywriters and learned from some of the best in the business – a daunting prospect for this introvert.

“I was absolutely terrified at my first Bootcamp. I actually got seriously sick one day because of anxiety,” Jerry recalls. “Everyone thinks that Job Fair clients are like gods, but I soon realized these guys need you as much as you need them. You just have to get good at your craft.”

In one conversation with a prospective client at that first Bootcamp, the contact, from a natural health company, suggested that Jerry write an article for them. And with that, he landed his first paid project. That published article bolstered Jerry’s confidence and validated his hard work. And when the $100 check arrived, he made sure to snap a picture of it.

Natural health, it turns out, proved a natural fit for Jerry. While he had always eaten farm-fresh foods, his son’s health challenges led him to become an avid student of health and biochemistry. The family came to grow more of their own food and add needed supplements.

That passion perfectly poised him for projects with natural health companies. Not only did he know the science behind it all, but he knew the reader’s mindset. At every Bootcamp – five in total – he picked up more natural health clients.

“Job Fair kickstarted feeling comfortable with, and getting, clients,” Jerry says. “And with each new client, I have gotten better at networking and positioning myself.”

While Jerry became more savvy at networking, his copywriting results also spoke for themselves. A special report on male aging, written for The Institute for Natural Healing, beat the company’s control (the previous best-performing copy) by 150 percent.

When the opportunity arose, Jerry accepted a full-time copywriting position with The Alternative Daily, an online natural health publisher. It offers the best of both worlds – a reliable income to support his family of eight and the ability to work from home with non-traditional hours.

With a flexible schedule, Jerry fits in farm chores, exercise, occasional home-schooling events, and volunteering at a local nature center. He’s also pursuing multiple income streams, including moving forward on that parenting book and coaching other parents. As anticipated, Jerry can remain home with his children when the need arises. He’s proud, and still a bit surprised, in his 180-degree career change.

“I’m amazed that I made this transition,” Jerry says. “With a farm mentality, my dad was probably shaking in his boots when I told him I was getting into sales, because he hated it when businesses sent people to the farm to sell him stuff. But it’s not really selling. It’s building relationships and offering people solutions to problems.”

Ready to pursue the writer’s life? Learn more about the program that launched Jerry’s career, The FastTrack to Copywriting Success Bootcamp & Job Fair. 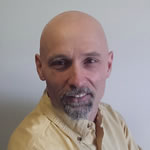 “Job Fair kickstarted feeling comfortable with, and getting, clients. And with each new client, I have gotten better at networking and positioning myself.”

Member:
Jerry Bures
Location:
Northern Wisconsin
Other Careers:
Air systems Engineering
How He Got His First Client:
Jerry struck up a conversation with a marketer from a natural health blog at his first Bootcamp, leading to an assignment to write an article.
Top AWAI Programs: