Retiree Makes MORE in Retirement than in Her Old Job, While Finding Purpose in Writing for the Christian Market

But a call from her insurance agent, who needed copywriting help, unexpectedly set her on the path of a new career. After honing her copywriting skills and choosing to focus on writing for the Christian market, Marianne built an income stream that surpassed her journalism pay and enabled her to create a more fulfilling retirement.

“I suddenly had a purpose, and saw something I clearly didn’t see before – the potential to do something that I love while helping others,” she says.

For Marianne, “copywriting” had always been a dirty word. “I thought persuasion was a negative thing,” she admits. “I couldn’t put my heart into selling something someone doesn’t want.”

It didn’t help that Marianne had earned a poor grade in a copywriting course in college. But after her insurance agent reached out for writing help, Marianne took a closer look at copywriting. An online search for training programs led her to American Writers & Artists Institute (AWAI). Not long after that, she invested in AWAI’s Web Copy 2.0. As she began studying, for the first time she saw copywriting not as a pushy practice, but an essential communications tool.

“I had rush of adrenaline. I literally felt like I struck gold,” she recalls. “The missing piece for me was understanding the difference between persuading someone or being the answer to someone’s prayer. You’re helping someone solve a problem.”

Stepping into – and Past – Fear

Tapping into her connections, Marianne secured a copywriting project through a friend from church. After providing a free analysis of the friend’s website, Marianne went on to rewrite the content to be more effective.

She picked up a few other projects here and there, but struggled to find clients. In journalism, editors had always handed her projects and sources. In copywriting, shyness got in the way of growing her business.

“I came back from the Web Intensive loaded with ideas,” she says. “I was so fired up and had gained the confidence to reach out to clients. Within a week, I got 2-3 good-paying customers.”

That same year, she attended The FastTrack to Copywriting Success Bootcamp & Job Fair, an annual AWAI event bringing together hundreds of copywriters. She learned from some of the top copywriters in the industry and connected with other members. After returning, she and several others formed a copywriting group on Google Hangouts for ideas and support. Nearly five years later, the group continues meeting every two weeks.

Marianne’s mastermind group and live events have helped her gain much-needed confidence to set big goals and market herself. Likewise, writing a series of soul-baring Reality Blog posts for AWAI’s Wealthy Web Writer enabled her to “step into her fear” – an essential step in moving past it. On top of all that, having a greater purpose in writing for the Christian market transcends her hesitance.

It helps that she doesn’t need to resort to cold calling. If she produces engaging content on her website and stays active on social media, she sees a continuous stream of inquiries, leads and ultimately new customers.

Just-in-Time Learning with Circle of Success

Marianne never intended to focus on the Christian market, however, she had built a large base of connections through two decades as a writer for Christian media. After a business coach urged her to run with it, she jumped in completely. That started with choosing the most ideal URL possible: christiancopywriter.com. Though the name was initially taken, Marianne watched, waited and grabbed it as soon as it came available.

Today, Marianne writes web content, landing pages, auto-responders, video sales letters and more for Christian B2B organizations and nonprofits. As a member of AWAI’s Circle of Success, Marianne has access to all programs, enabling her to ramp up fast whenever an unfamiliar project comes her way. That’s exactly how she learned how to write video sales letters.

“The most valuable AWAI program is whatever I need at the moment to help a client!” she says. “Circle of Success has really been worth the investment for me.”

Today, Marianne is not just a writer; she’s an entrepreneur with multiple sources of income. More recently, she started teaching others how to get into Christian copywriting. To that end, she’s launched a pilot of a training program for a small group of writers.

“I’m creating my own training program to help writers get focused and pointed in the right direction,” she says. “I absolutely love helping these people.”

When Marianne first began copywriting, she expected to add a little financial cushion in her retirement. But the reality has far exceeded that. With focus and diligence, she has achieved income well beyond what she earned as a journalist.

“With copywriting, we have been able to move forward with home renovations and take more trips,” she says. “I can coax my husband into traveling with me and even buy his ticket. We’ve done all this, thanks to copywriting.”

Learn more about the program that launched Marianne’s career, AWAI's Secrets of Writing for the Christian Market. 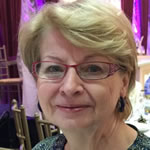 “I came back from the Web Copywriting Intensive loaded with ideas. I was so fired up and had gained the confidence to reach out to clients. Within a week, I got 2-3 good-paying customers.”