2008 February Who is Elmer Wheeler?

Who is Elmer Wheeler … and how can he boost your response rate?
By John Wood, AWAI Staff Copywriter 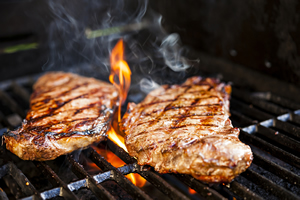 That just might be the most famous piece of sales advice ever. And as a copywriter, knowing the real meaning behind those words can transform your writing – and your career.

I often wondered who came up with such a great line. Until about a week ago, I still didn’t know …

I was reading Joe Vitale’s latest book, Buying Trances. In it, he mentions Elmer Wheeler as its originator.

Born in 1904, Mr. Wheeler was well known as one of the pioneers of persuasion.

In Buying Trances, Joe tells the story of how Texaco was looking to sell more oil to their customers. Too many people, without giving it a second thought, said “no” when a service station attendant asked “Check your oil today?”

Wheeler suggested replacing the question with “Is your oil at the proper level today, sir?”

Now asking something like “Is your oil at the proper level today, sir?” would seem to be just common sense. A line so simple you’d think most gas station owners would naturally come up with it – but few did.

Which is why Texaco paid Wheeler $5,000 for those nine words … a small fortune in the depression-riddled 1930s.

They got their money’s worth and more. In one week, Texaco attendants got under 250,000 more hoods.

Another Wheeler sales triumph came when he was asked by the president of Barbasol to help them sell more shaving cream.

The first slogan they tried was “How Would You Like to Save Six Minutes Shaving?”

Wheeler instructed their salespeople to then say “Use Barbasol. Just spread it on. Shave it off. Nothing else required!”

When they tested it, they found it increased sales by 102%.

A light bulb went off in Wheeler’s head, and he changed the slogan to “How would you like to slash your shaving time in half?”

That adjustment increased sales by another 300%.

“Don’t think so much about what you want to say as about what the prospect wants to hear– then the response you will get will more often be the one you are aiming for.” 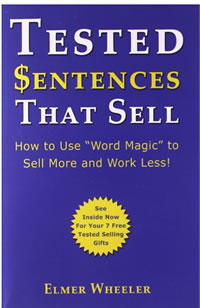 In his book Testing Sentences That Sell, Wheeler laid out his five “Wheelerpoints:”

I’ve printed out these five Wheelerpoints and taped them up next to my computer. They’re as meaningful for all of us in the “persuasion business” today as they were when Elmer came up with them 60+ years ago.

[Ed. Note: Have you come across any good books that your fellow copywriters might not know about? If so, we’d like to hear what they are and why you think they’re valuable. Send us a note.]

38 Responses to “Who is Elmer Wheeler … and how can he boost your response rate?”