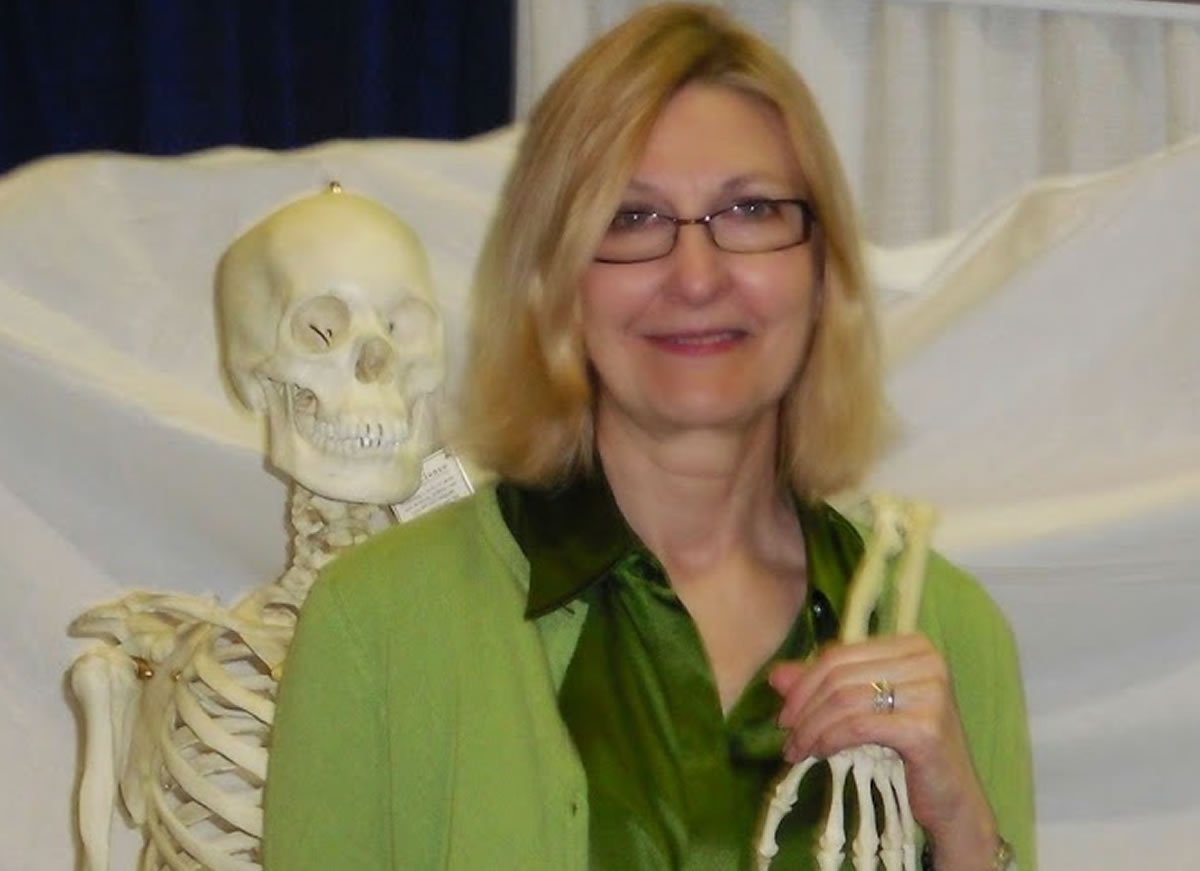 Becky Masterman, author of a four-book series, is both a connoisseur and creator of enticing phrases and fascinating storylines.

After getting her start from a friendly NaNoWriMo-based competition with her husband, the seed of Becky’s first published novel was born, called Rage Against the Dying.

A debut thriller, Rage went on to be nominated for seven awards including the Edgar, Anthony, Gold Dagger, Macavity, Barry, International Thriller Writers, and Audie. On top of that, the entertainment rights were purchased by Tomorrow-ITV Stu­dios.

Since publication, Becky has amassed a healthy number of fans who celebrated the second and third books in her series, titled Fear the Darkness, and A Twist of the Knife.

Now, Becky’s fourth book in the series, We Were Killers Once, was just published June 4th.

She was kind enough to give us an interview from her home in Tucson, Arizona, where she shared some backstory into her writing journey, including how she’s able to enjoy the (sometimes painful) process.

Born with a true love for reading, Becky is proof you can successfully pursue the writing dream at any age. Note her entertaining “sweater” take on the rewriting process!

Plus, she’s got great insights about what to do once your book is scheduled for publication. Read on for more …

Was writing a lifelong dream or something you grew into?
I only started studying the craft in earnest when I was 40, writing plays. But I think there are qualities that fit us for being writers from early on. A love of stories, and a tendency to ask “what if?” Being comfortable on the outside of a group, observing. And those times I would make my mother a card and she’d burst into tears reading it. I thought that was pretty cool, being able to move someone to tears.

The New York Times review of your book, Rage Against the Dying, called it a “scorching debut” and “cleverly manipulative,” among other compliments. Did this — plus the seven awards you were nominated for — make it harder or easier to write the sequel?
Those were heady times. It was very hard to write the second book but I think if the first had been an abysmal failure that would have been worse. Because I prefer to read something new, rather than a repetition with, say, a higher body count, I tried to throw an entirely different problem at my protagonist. As a result, there are a few people who tell me they liked the first book better. I don’t feel badly about that, just grateful for their honesty so I can try to do better. It’s not about satisfying my own creative drive, it’s about delighting readers.

A photo posted by the Facebook Community, Readers of New York, shows a woman reading your book on the subway. What does it feel like to see a stranger who chose, out of all the thousands of books out there, to read your book?
This is such a good point. Writers feel badly when their books don’t sell as well as anticipated, but I always said, hey, there are 100,000 new books published every year, not counting those published in previous years! That any one person should choose mine is a miracle.

You’ve said that one of the best things about writing is attending book clubs. As a writer, what do you gain from that experience?
It’s like a free focus group. Once the club trusts that they’re not going to hurt my feelings, I can ask what worked for them and what didn’t, and get better. Accountability groups can work the same way for copywriters. If you listen really well, the suggestions and questions can spark a whole new perspective. I like this collaborative view of writing.

Where do you find the inspiration behind your writing?
You never know where an idea is going to come from. It could appear in a book, or in watching two strangers interact, or a news item, or a magazine article, or a friend telling you their troubles. That means you have to stay alert and ready to make that leap into story. You have to be “writing” all the time.

Your bio mentions experience as a copywriter. What kind of copywriting did you do, and does that background help when it comes to fiction writing?
It’s embarrassing to talk about this with AWAI folks who really write copy. In my job, I just described scientific reference books for catalogs. Most of the time I didn’t even know what I was writing about, like schistosomiasis (it’s a parasite) or electromagnetics. But it’s always valuable to write on deadline, and what I was able to learn in science and medicine (especially forensics) has served well in writing my stories.

Do you think someone can earn a living suc­cessfully as a copywriter by day and a novelist by night?
Every author, at least at first, needs to have a day job. Anthony Trollope, the 19th century British author, worked at a post office his whole life. He would write from 5:30 to 7:30 in the morning, sometimes stopping mid-sentence. That’s how disciplined you need to be. It took me nearly 25 years before I was able to support myself on fiction writing alone. Besides, just think of all the great material you collect while moving through the world, working with other people, in copywriting or any other profession.

You’ve said you go through several revisions in the editorial process. What does that entail — assuming it’s more than just tweaking a sentence here and there?
In attempting to cut down to three drafts instead of the seven I was doing for the first two books, I submitted a 50,000-word rough draft of my third book. Here are just a few of the comments I got from my agent and editor: “Change the motive for the villain.” “Have a different villain, one who isn’t dead before the story starts, it’s not satisfying.” “Place the final reveal at a more dramatic moment.” “Give the loan shark a bigger part to play, and go deeper into his character because right now he’s cartoonish.” “Move that murder into the second act.” You see, rewriting is more like reknit­ting a sweater from the inside out, changing the stars to polka dots. It’s often agonizing, but it makes a better book, and that’s what you want, right?

You wrote six books that were never published, prior to Rage Against the Dying. What did you gain from those?
There’s a story about a conductor who was re­cording a symphony. After the 85th take, he said, “Go ahead and use it, but I think I could do better.” This is the glory of the creative process, always reaching for an unobtainable vision. I may be a genre writer, but that doesn’t mean I’m a hack writer. Those first six books taught me the craft of character and plotting, and how, as Roger Rosenblatt says in his book on writing, how to move the human heart. I learn more with each successive book I write.

Career Day with a 5th grade class. Becky Masterman collaborated with the kids on stories to show what authors do.

How do you measure your success as a writer?
Certainly, advances on royalties are gratifying, and I suppose that’s one way to measure success, but once you have enough to survive, the rest is a game. If money is your measure, you’ll never feel like a success because someone out there will always be making a lot more. And what felt like a lot of money in your bank account this year, next year doesn’t feel like so much. No, success is measured in those moments when you look at a sentence you’ve written and think, “Now that’s original.”

Congratulations on the publication of your fourth book in your Brigid Quinn series! Tell us a little bit about We Were Killers Once …
In 1959, a family of four was brutally murdered in a small Kansas town. Truman Capote immortalized them and their killers, Dick Hickock and Perry Smith, in a new kind of journalistic account called In Cold Blood. Capote called his book ‘immaculately factual.’ But since then, investigative writers have cited details that show it’s not factual at all. So, what if in all the death row interviews, Perry Smith was lying to Capote, and hiding the existence of a third killer? That killer was just a child at the time of the mass murders, is still alive, and is now coming after Brigid Quinn’s beloved husband for reasons known only to himself.

What are your future book-writing plans?
Besides the potential of a fifth Brigid Quinn story, I’m developing an idea for a stand-alone domestic thriller.

What’s your top advice for someone who wants to get published someday, regardless of the type of book?
Read, read, read. Did you know Stephen King reads about 80 books a year? And be grateful for criticism. Use it to become a better writer. Praise is useless.

Once your book is scheduled for publication, will the publisher promote the book for you?
Publishers are crazy about debut novels that offer something different, or alternatively ride along on the latest popular theme. In that case, there will be many ARCs (Advance Reader Copies) sent to the media, Goodreads, booksellers, prize committees, and to famous authors to seek blurbs.

For later books, the publisher has asked me to provide content (for free) to online magazines (sort of like actors who appear on late night talk shows). I just finished two articles on elements of We Were Killers Once and, believe it or not, an essay about my dog Boodle.

Whether or not this happens, your job is to be present on social media, say yes to anyone who wants you to speak, and think of any promotional angles to explore. For example, my protagonist is aging, but doesn’t bake or knit. She has an earthy vitality and sometimes makes rookie mistakes. So it’s understandable that my books should be recommended by the AARP, and even that I should be invited to speak to the Arizona Gerontological Nursing Society. Who would have guessed that? You can hone your speaking skills by talking to book clubs and observing what thrills them.

Above all, while your writing may necessarily be the most important thing in your life, keep it in perspective with a sense of humor and a love of friends and family. And movies. And good food. And the certainty that your most important function in life is to provide a lap on which your dog may fall asleep.

Do you feel driven to write? Do you have any questions about how you can get started on a paid writing career? Share with us in the comments.